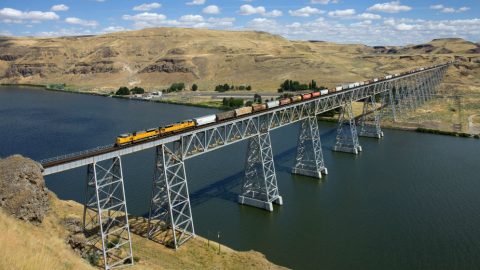 Concerns about US infrastructure extend to railways

Therefore, there is a certain irony in the derailment of a Norfolk Southern train in late June. Of all the more than 30000 route kilometres over which the company roams, it was in the middle of Great Dismal Swamp National
Wildlife Refuge that one of their leviathans on rails should come to grief.

A one hundred car coal train derailed so completely that its load of powered coal leaked into the water course, and made Great Dismal Swamp even more dismal than usual. Not the usual way that fossil fuels harm the environment, but as we all know there is still some scepticism about climate change in America. What is not in doubt is that when freight trains attack, they attack big in America.

Yet, in this vast country, such incidents are anything but rare. Earlier in the month, a Union Pacific train in Nevada came to an abrupt halt, piling up trucks and spilling vegetable oil and diesel in quantities great than the average salad dressing, requiring the closure of a nearby interstate highway. In Mississippi, flash flooding was blamed for a speculator pile up in May. Footage of the concertina of white wagons in the thick green undergrowth made headlines around the world. It is little more than a year since rural Iowa was witness to a crude oil train, derailed on a flooded river crossing, disastrously spilling its cargo.

Putting this in perspective, the Federal Railroad Administration says that the US network is carrying more goods than in a generation, and has seen a dramatic reduction in incidents. According to the agency’s own figures, intermodal traffic has almost doubled since the turn of the century, approaching ten million units moved annually.

Despite headline catching accidents, made to seem commonplace simply by the size of America’s freight-led network, an overview from the Administration says rail safety remains at an all-time best. “We owe it to the public and rail workers to continue our efforts. Continuous safety improvement requires a comprehensive strategy designed to eliminate risks on railroads,” says the statement.

However, given the transcontinental size of the network, the recent funds allocated must seem like a drop in the ocean when compared to committed funds in European nations where, for example in the UK, the infrastructure agency Network Rail enjoys a budget counted in the billions of pounds sterling each year.

Given that no one would argue with more investment in the US network, it seems inevitable that moving large numbers of very heavy freight trains around America will result in future mishaps. It is a mercy, given the nature of
the traffic, that most incidents can be viewed as spectacular failures, and not tragedies. That’s a way with words that most Americans would appreciate.