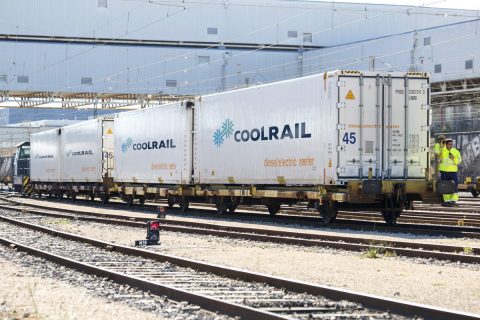 On Monday 6 May the first CoolRail train left the Port of Rotterdam on the way to Valencia. In the Spanish city it will be loaded with fresh produce and make its way back to the Netherlands. The blocktrain is the first trans-European fresh-dedicated rail connection.

Three days a week the conditioned train moves between the three hubs. It departs from Valencia on Monday, Wednesday and Saturday, carrying fresh products destined for Northern Europe. On the way back to Spain, it transports the empty trays of the products delivered.

“After extensive preparations and the first pilot test, we are now taking the big step to drastically reduce the carbon footprint of the transport of fresh products”, said Gerjo Scheringa, CEO of Euro Pool Group. The train replaces 41 truckloads per journey, while it is just as quick as a truck drive between Rotterdam and Valencia (48 hours). “CoolRail beats transport by road” EPS commented.

CoolRail meets a growing market demand. Refrigerated food such as fruits and vegetables form a large portion of cargo moved between Spain and the north-west of Europe. Germany is the largest market, receiving 100 thousand containers from Valencia per year. Another 60 thousand containers are shipped to the UK, while 44 thousand units reach the Netherlands. Especially oranges and tangerines are moved in large volumes, making up 45, respectively 42 per cent of all refrigerated freight on this route.

One of the bottlenecks in establishing the service was the varying maximum train length in Spain, as the network did not permit trains carrying more than 32 containers. This problem has now been solved, and 42 containers travel back and forth in every journey. Moreover, the train could take a detour and pass by Barcelona. If export demand from Barcelona surges, this could contribute to a scale up of operations during summer. Currently, exports during winter account for much more cargo than during summer.

The route to Valencia is the start of a network. The plan is to grow and deploy CoolRail train connections to Germany, Scandinavia and the United Kingdom. CoolTrain is a product of Euro Pool System, Shuttlewise, Bakker Barendrecht / Albert Heijn, Visbeen, Kloosterboer, DailyFresh, EasyFresh, Primaflor, Bollo, Agroiris, Fruveg, TobSine, Pozo Sur and Samskip.

Fresh food rail service Valencia-Rotterdam to be launched next year 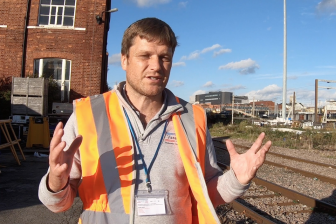