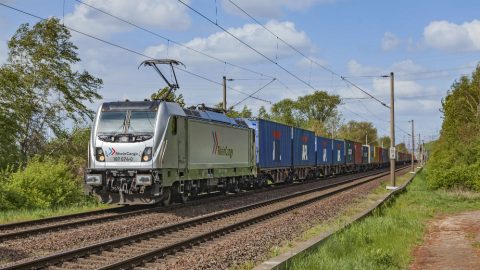 The new container train connection between Cologne and the seaports of Hamburg and Bremerhaven has been successfully launched. On Monday evening (6 May), the first shuttle train from Hamburg arrived in Niehler Hafen in Cologne. Early on Tuesday morning, the train was sent on the return journey from the Rhine to the Elbe.

The first train from Hamburg had to deal with an unexpected event shortly before its arrival at the CTS Container Terminal in Cologne. In Cologne’s district of Ehrenfeld, an American bomb from the Second World War had been found that same day, and had to be defused. This caused a brief delay of the train, but other than that the trip was not impacted.

The new shuttle service was setup by the CTS Container Terminal (which belongs to HGK subsidiary neska) and IGS Intermodal Container Logistics (which belongs to the IGS Logistics Group Hamburg). Traction will be provided by RheinCargo, which already moves regular bulk between the Rhineland and the Port of Hamburg by rail.

“We are very pleased that our cities are now connected by regular container trains three times a week in both directions”, commented Oliver Haas (CTS General Manager Business Development) and Bernd Trepte (Managing Director IGS Intermodal). “In addition, we offer shipowners and freight forwarders a reliable and environmentally friendly transport solution, which also connects the western ports of Antwerp and Rotterdam. If demand rises, it will be possible to expand traffic”, they added.