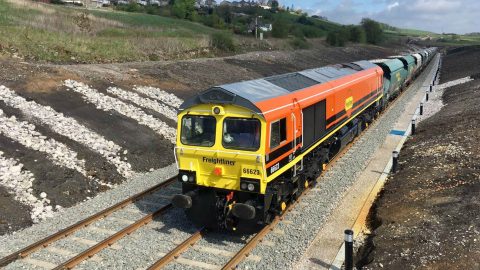 Network Rail has transformed a disused council tip into 430 metres of railway sidings so longer freight trains can serve local quarries. The investment in the northern region of the UK means that freight operators as DB Cargo and Freightliner can now increase their number of wagons on each train from 18 to 26. This allows up to 2,500 tonnes of stone to be transported during each load, providing a boost to UK building projects and the environment, Network Rail noted.

“This is a significant development for rail freight in the Peak District and will go a long way to relieve some of the constraints we face in the area”, said Andrew Sumner, head of industrial sales from DB Cargo UK. Adam Cunliffe, chief commercial officer at Freightliner added: “The extended sidings at Buxton mean that we can run longer trains with more wagons, helping deliver an increase in the movement of freight by rail in the area and all the associated economic and environmental benefits that brings.”

A car and household waste had to be safely disposed of during regeneration of the former council tip.
The area has now been landscaped to sympathetically blend into the surrounding countryside.
Labour MP for High Peak Ruth George officially opened the new railway on Monday 29 April.