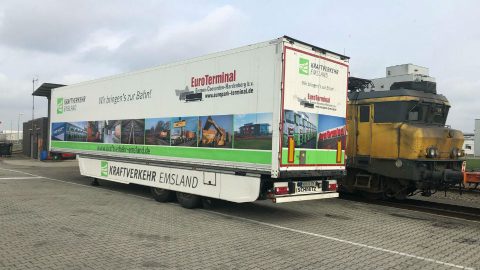 After Tilburg, Amsterdam and Venlo, the Dutch city of Coevorden may be added to the railway network connecting the Netherlands to China. The terminal on the Dutch-German border is looking into a new railway service to various Chinese destinations. The product is called C2C, which stands for Coevorden to China.

“We want to organise combined train sets to Brest (Belarus), from where they can be distributed to various Chinese cities”, explained Rob Spierings, Strategic Business Development Manager at Bentheimer Eisenbahn AG, operator of Twinport Bentheim Coevorden. Spierings will share his vision on terminal development at the conference Improving Rail Terminal Efficiency on 28 March 2019.

The Eurasian rail product is just one of the plans of EuroTerminal Coevorden in the north of the Netherlands. Also in the pipeline are four to five weekly shuttles to and from the Port of Rotterdam, and a new, additional terminal dedicated to railway traffic to eastern European destinations. “Coevorden is gaining importance as an inland terminal”, Spierings noted.

EuroTerminal Coevorden is situated at the border with Germany and forms a twin terminal with its German counterpart in Bad Bentheim, which lies 70 kilometres further south-east. It is the northernmost terminal on the Dutch-German border. “Previously, the focus in the Netherlands was on the region below Zwolle. There was not much interest in the northern region. But with hinterland connections to countries north of Europe, the terminal in Coevorden is becoming more important.”

“We are discussing to increase the frequency of the shuttle to and from the port of Rotterdam”, Spierings said. Currently, this service runs three times a week, but this could become four or five times a week, as the terminal in Coevorden forms an important link to the Scandinavian countries. Three days per week the the Malmö Shuttle connects Coevorden, Bad Bentheim and Malmö in Sweden.

“In Rotterdam, cargo destined for Scandinavian countries is often transshipped to continue by vessel. However, container volumes are rising and this puts a lot of pressure on the port. Putting this cargo on the train to Scandinavia via Coevorden could be an interesting option”, Spierings explained.

“The port is aware of the added value of inland terminals”, Spierings continued. Indeed, in a white paper called The Impact of Five Megatrends on the Container Industry, the Dutch port wrote: “The European hinterland is characterised by the presence of various well-developed logistics zones. At first glance, these zones appear to form a threat to the larger sea ports, but by moving with the market and investing in new developments, the sea ports can convert these threats into new opportunities.

“The interaction between sea ports and inland ports will result in the development of a larger logistics pool comprising multiple logistics zones, in which a further integration of intermodal transport and supply chain management will result in new services and added value”, the text continues. The Dutch Tech Zone comprising of Coevorden, Hoogeveen, Emmen and Hardenberg is committed to becoming an industrial hotspot in the Netherlands by 2030. However, if the region really wants to bloom, there are still a few barriers in place, Spierings explained.

“We have really suffered from the increase in track access charges in the Netherlands. This is especially cumbersome for short-distance traffic, in this sense we lost a lot of traffic to the road”, he explained. “Luckily, the Dutch government has now committed to reducing these charges in order to create a level playing field with neighbouring Germany. We expect significant growth of railway traffic due to this measure.”

Facilitation of longer trains is another factor of growth for the terminal, which is currently ready to handle trains of 740 metre length. “We have constructed a rail curve to allow for longer trains, but we need infrastructure to be upgraded with similar measures. In this way, we could put more containers on rail cost-effectively.”

According to the railway consultant, the concept of the Blue Banana is gradually shifting. This concept refers to the focus of transport flows along the German Rhineland, Southern Germany, Alsace in France in the west and Switzerland to Northern Italy in the south. “Nowadays Scandinavia and Poland are getting in the picture. This is only to increase with the completion of Rail Baltica, which connects Poland to the Baltic states”, he pointed out.

It is therefore not surprising that another project on the shelves is to set up a large, additional terminal for rail freight traffic destined to eastern European countries. But also the countries south of Poland are within the scope of EuroTerminal Coevorden. “We want to set up a direct connection to Duisburg in order to serve mid- and southern Europe”, said Spierings.

With years of expertise in the development of inland terminals, Spierings will take part in a panel discussion about the geographic location of terminals at the conference Improving Rail Terminal Efficiency. How many inland terminals should there be in a given territory in order to support the flow of goods? How should they be distributed? What is the ideal sea port/inland terminal ratio? These are some of the topics that will be discussed in this panel.