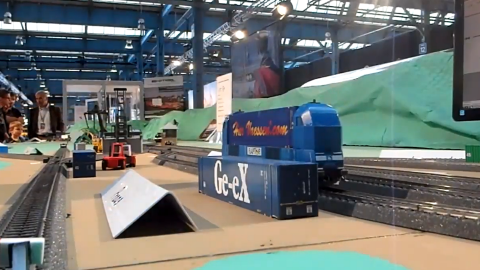 Driverless wagon ready to hit the track in the Netherlands

Autonomous single wagons that access whatever train path is accessible: that is the future of rail freight. These wagons will make rail as flexible as road, believes Paul van Bers, Innovation Project Manager at Container shift2rail. The wagons are already there, but some challenges remain. Van Bers will present this innovation at the Freight and Terminal Forum, taking place from 26-28 March in Utrecht, the Netherlands.

It was in 2012 when van Bers stood at an airport, looking at the luggage belt. Thousands of luggage pieces are thrown on this belt every day, and find their way to the right destination. The sorting is done behind the scenes. “I suddenly realised that this is the future of rail, this is how individual containers should be arranged and distributed to end up on the right track. It is a first-mile rather than a last-mile service.”

Van Bers gathered a group of people equally enthousiastic about the idea and applied for a subsidy in the Netherlands, where he lives. “I received 100 thousand Euro to realise the concept.” Two years later, the wagon was there, ready to hit the tracks. RWTH Aachen University had built an automated unit. The software was provided by Container shift2rail.

“The software makes this wagon autonomous. It is a smart wagon, it can improvise and react. It can operate alongside the traffic management system of a network, as it is able to observe when a train path is available. As such, it does not need to request a train path in advance.”

It is this last asset that makes the wagon an ideal unit to compete with the road, explained van Bers. “Rail is a non-flexible modality; when an operator wants to carry out a train journey, it must first check train path availability and then request access many days in advance. A truck on the other hand can depart when required. This autonomous wagon can do the same.

“Currently, the sector is focussing on longer trains, to be able to carry more cargo in one journey. That is a good solution for the transport of bulk, which usually requires several wagons for the same cargo. But containers are like people; they all have a different origin and various destinations. If these can be moved individually and immediately when required, rail truly becomes a more flexible modality.”

Nevertheless, there are still a lot of hurdles on the way, van Bers admits. Today, seven years later, the wagon is still not on track. To begin with, the software system that allows the wagon to spot available train paths – the Supervisory Route Control System (SRCS) must be marketed. Moreover, the concept should be embraced by the industry. “We need to gain trust from train operators, so they are interested in using this rolling stock”, the innovator noted.

The introduction of the wagon could be phased out in three stages, he explains. For this, the company has considered specific locations in the Netherlands, such as the Maasvlate II at the Port of Rotterdam. Here, the wagon could be used for inter-terminal transport. In the same premise, the wagon could serve as feeder to the Rail Service Center (RSC).

“Eventually, we should create extended gate terminals to access the hinterland rail network. For example, the Betuweroute in the Netherlands could have a dedicated entry point for the autonomous wagons, in so it does not clash with the regular traffic. In this way, large terminals will experience a smoother flow of goods to the hinterland, or the other way around.”

Paul van Bers will provide a workshop about the innovative concept at the Freight and Terminal Forum, which takes place from 26-28 March 2019 in Utrecht, the Netherlands. Registration for this large-scale event is already open. A full list of available workshops can be found here.