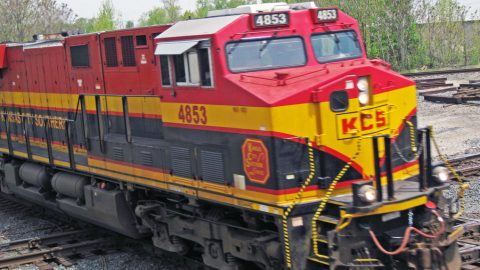 US rail freight company Kansas City Southern Railway (KCS) will start developing a cargo processing facility on the US-Mexican border this month. The aim is to improve train traffic between southern Texas, the US and the neighbouring Mexican state of Tamaulipas. The project has a total budget of 86.5 million Euros.

KCS transports cars and automobile parts, steel, grain and petroleum products. The company estimates it can offer up till 32 trains per every 24-hour period once the facility is completed. Currently it operates 24 trains per day as infrastructure poses a bottleneck, limiting further traffic expansion.

KCS first announced its plans last summer. Before starting civil works, the company negotiated with the US and Mexican customs authorities to set up official inspections in Laredo (US) or Nuevo Laredo (Mexico), following a parallel timeframe.

In addition, it negotiated with trade unions not to change drivers when trains cross the border. Both agreements cut the time a train stops at the border, which is essential not only to increase income but also to avoid criminal attacks. The following step to reach the projected 33 per cent traffic increase is the development of the new facility.

KCS is the main rail freight operator in the US offering services to Mexico, serving twelve ports on the Gulf of Mexico and one on the Mexican Pacific coast. The rail track between Laredo and Nuevo Laredo handles around 40 per cent of rail traffic between the US and Mexico.

A canal would be the best sustainable symbolic investment for America. Why???