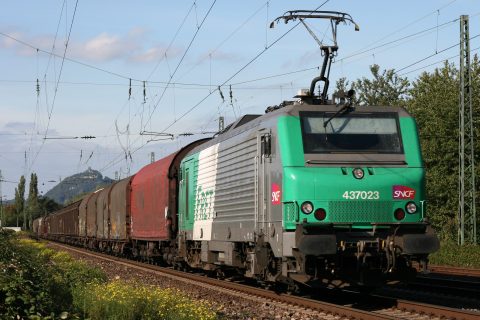 France is ready for the formal examination procedure by the European Commission into the conditions of the financing of SNCF’s rail freight unit, Fret SNCF, dating back several years before its transformation into a subsidiary in 2020. It says to be confident in the mutual will to guarantee the future development of rail freight.

A statement issued by the Ministry of Transport said that the government “is committed to providing the Commission with all the relevant information within the framework of this procedure, which it (the government) is approaching in a cooperative and determined spirit. The statement underlined that the SNCF Group had helped maintain rail freight in France when the sector faced increased competition.

“In ensuring the conditions for the creation of Fret SNCF SAS on 1 January 2020, as part of a rail reform programme, the state enabled “the continued transition of a key player” within the context of climate change and the need to develop a low-carbon transport solution.

The statement highlighted that French state support for rail freight was reinforced a year ago with the drawing up of a recovery plan to promote the sector as a more environmentally-friendly and less energy-consuming mode of transport (compared to road haulage). It added that the plan forms part of the European Commission’s Green Pact, with the ambition of doubling the market share of rail freight by 2030.

France’s Transport minister, Clément Beaune, commented: “The government approaches this procedure with confidence, given the reforms and efforts undertaken. We are more determined than ever to guarantee and develop the place of rail freight in France.”

In a statement on 18 January, the European Commission said that France’s financial support for Fret SNCF, a chronic heavy loss-maker, could contravene EU rules. Its investigation is aimed at verifying whether or not that Fret SNCF has enjoyed an unfair economic advantage over its rivals in the rail freight sector.

The Commission “is concerned that certain measures in favour of Fret SNCF, granted during the period 2007-2019, do not comply with EU rules on state aid”, the statement noted.

The investigation will focus on aid packages, estimated at between €4 billion and €4.3 billion. made by SNCF to Fret SNCF from the beginning of 2007 until its transformation into a limited company on 1 January 2020. The Commission will also examine the cancellation of Fret SNCF’s financial debt (€5.3 billion) in 2019, as well as a capital injection of €170 million into the subsidiary when it became a stand-alone a commercial entity.

During this period, the losses of Fret SNCF SAS, a wholly-owned subsidiary of SNCF, were “continuously covered” by the parent company “by means of intra-group cash advances, which constitute public resources because of the state ownership and control”, the EU executive explained. “The opening of an in-depth investigation gives France and other interested third parties, including the beneficiary, the opportunity to comment. It does not prejudge the outcome of the investigation,” the Commission’s statement concluded.

A spokesperson for Rail Logistics Europe, of which Fret SNCF is a part, told Railfreight.com. “We will not make any additional, specific comments, as everything has been said in the statements issued by the European Commission and the French Ministry of Transport.

“This is a long procedure, and of course, we will be working closely with the state in order to provide the necessary response to ensure that this procedure runs smoothly.’