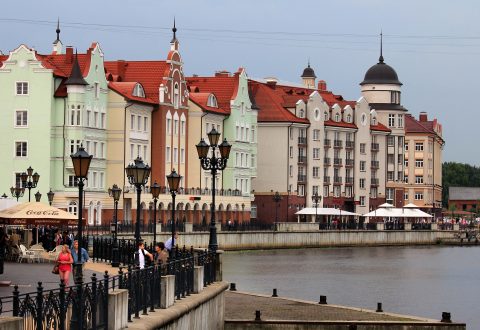 Tensions between Russia and Lithuania have increased since the EU sanctioned the land transit of goods, including steel and concrete, from Russia and Belarus to Kaliningrad.  According to Russia, the quotas established by the EU in June for land transit of goods are too low. Moreover, the quotas established for various products have already been exceeded.

Russian politicians and influential figures have met at the Valdai Discussion Culb to discuss the current situation concerning the Russian exclave. Among the speakers in charge of the discussion, there were Anton Alikhanov, Governor of the Kaliningrad Region, and Alexey Isakov, Ambassador at Large of the Ministry of Foreign Affairs of the Russian Federation.

At the event, Alikhanov stated that Kaliningrad is allowed to handle around 500,000 tonnes yearly in total in both directions. However, some quotas have already been reached, making it impossible for the region to, for example, import cement from Belarus. The EU based its calculations for the quotas on the average volumes for the last three years.

“Today, we have already exhausted the limits set by Europeans for the transportation of goods by rail: for instance, certain kinds of iron, steel, oil products, fertilisers, antifreeze, and timber,” Alikhanov was quoted as saying at the Valdai meeting by TASS, a Russian news agency.

“Lithuania reached the frontline in offering any new restrictions for goods transit to Kaliningrad and from Kaliningrad,” Isakov was quoted by TASS. The ambassador has been quite vocal about the restrictions imposed by the EU. In March, he was quoted by the Foreign Ministry claiming that the quota system constitutes “a gross interference in the internal affairs of our country”.

EU ban on imports of Russian coal to start today

It is also worth mentioning that the fifth package of the EU sanctions against Russia became active at midnight. The ban is on the import of Russian coal. It does not apply to Kalinigrad. The ban should cost Russia over 8 billion euros per year, considering that the Union is the Kremlin’s biggest partner for coal trading, as an EC spokesperson told Reuters.

However, the ban on coal is expected to hit the EU as well. Data from the RC shows that almost half of the coal in the 27 nation-bloc, in fact, comes from Russia. Moreover, when it comes to thermal coal, imports from Russia amount to 70 per cent. The ban kicks in at an already sensitive time: some EU countries, such as Germany, are currently struggling to keep up with coal demands because of gas shortages.