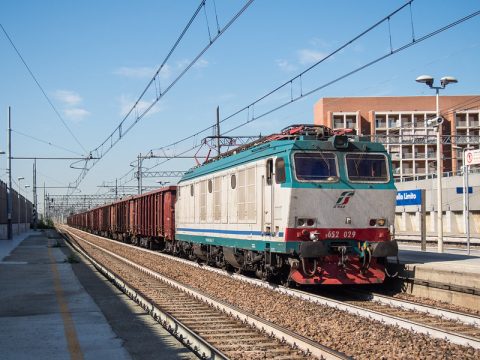 On 16 May, the Italian railway company Ferrovie dello Stato Italiane (FS Group), published its Industrial Plan for the next decade. Despite getting the smallest slice of the pie, the Logistic Pole will benefit from the largest investment made by the FS Group in the sector.

According to the document, over 190 billion euros will be invested in the country, with over 60% of the funds allocated in the Central-Southern regions. Four new business poles are planned to be created: Infrastructure, Passengers, Urban, and Logistics.

The main aim of the Industrial Plan is to increase intermodal freight transport and to improve passenger mobility throughout the country. The works and renovations included in the plan are expected to give more than 40,000 people jobs.

Investments in the four Poles

The Infrastructure Pole will benefit more than 160 billion euros in investments: 50 for road infrastructure and 110 for rail infrastructure. Over 15 billion euros are going to be invested in the Passenger Pole. No specific data were available concerning the size of the investments in the Urban Pole, which will focus on, for example, the improvements of stations and parking lots.

The Logistics Pole will receive over 2,5 billion euros, with the aim of doubling freight traffic (comparing 2019 with 2031). Sources from the FS Group highlight that the “2,5 billion euros exclusively refer to investments in rolling stock, wagons and locomotives, and that it is the largest FS investment plan concerning the logistics sector”.

FS Group also made specific plans for each region available. The region that will receive the largest investments is Sicily, with 20 billion euros, while the region with the least investments will be the Aosta Valley with 350 million euros. 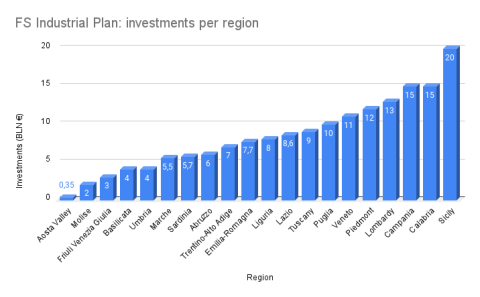 Engineer Roberto di Maria has, however, pointed out that almost half of the funds for Sicily will be utilized to complete projects that were supposed to be already finished. 900,000 euros will be invested in the Logistic Pole in the region for the extraordinary maintenance of the Catania Acquicella and Catania Bicocca terminals.

The region that will benefit the most from investments in the Logistic Pole will be Lombardy, with 160 million of the over 13 billion euros planned to go to the Logistic Pole. More specifically, the plan is to strengthen the terminals of Milano Smistamento and Brescia terminals.

The money that was not assigned in the region-by-region plans will be allocated for projects that affect the whole country, therefore are not catalogable in the plans, FS sources told RailFreight.com.

Quantity, yes, but basics, robust and resilent infrastructure, safely calculable, with safe margins, sustainably, allowing future, high axial load, etc., shall be the new Standard!
Added capacity and high utilisation of assets, now is requested – at an industry, where infrastructure , railway…, is Bottleneck…
(Track…- directly and indirectly, shall not remain cause, number one, for derailments, etc., etc.)
Low price, has turned devastating. Quality matters, in all respects…