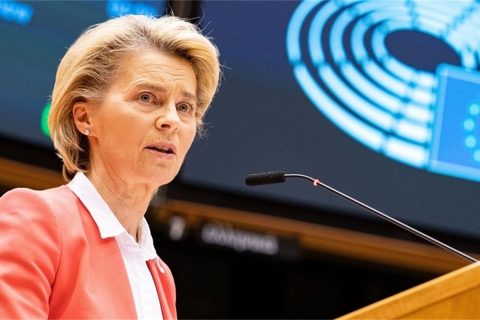 EU imposes sanctions on Russia, what do they mean for rail freight?

The EU has officially adopted sanctions against Russia after the invasion of Ukraine. The European Council decided to enforce “massive and severe consequences” for Russia that can be summarised in five main pillars: financial sector, energy sector, transport sector, export controls and financing and finally, visa policy.

EU president Ursula von der Leyen announced the measures on Russia in the late evening of 24 February. The sanctions could also affect Belarus, which was involved in Russia’s invasion of Ukraine, with the EU Council mentioning that it prepares a “further individual and economic sanctions package that will also cover Belarus”.

What do the sanctions mean?

Starting from the financial sanctions, they aim to cut Russia’s access to the most important capital markets. “We are now targeting 70 per cent of the Russian banking market, but also key state-owned companies, including the field of defence. These sanctions will increase Russia’s borrowing costs, raise inflation and gradually erode Russia’s industrial base,” stated president von der Leyen.

Second comes the energy sector. The EU wants to hit Russia’s oil industry. This will be done in combination with export sanctions. Specifically, von der Leyen explained that the EU will use an export ban to make it “impossible for Russia to upgrade its oil refineries,” which constitute one of the country’s most profitable export businesses with revenues reaching 24 billion euros in 2019.

Finally, the European Union will target Russia’s access to cutting-edge technologies that are essential for future development. At the same time, it will impose Visa restrictions with “diplomats and business people will no longer having privileged access to the European Union.”

When it comes to the transport sector, the EU sanctions mainly focus on air transport. Specifically, Europe wants to ban the sale of all aircrafts, spare parts and equipment to Russian airlines. “This will degrade the key sector of Russia’s economy and the country’s connectivity since three-quarters of Russia’s current commercial air fleet was built in the European Union, the US and Canada,” explained von der Leyen.

There is no direct ban on transport through Russia for the time being. Theoretically, trains can still travel to China through Russia, but they cannot stop there. However, the situation is quite complex when it comes to working with Russian companies. On the one hand, the financial sanctions do not strike the SWIFT international payment system meaning that transactions between European and Russian companies can still take place. On the other hand, the EU has sanctioned 70 per cent of Russian banks. This means that if one of these banks is involved in a company’s supply chain, the business will stop since payments can no longer occur.

Finally, sanctioned Russian exports are also critical. In practice, they mean that Russian companies will not be able to export their products in the European Union, which will impact westbound rail freight volumes from Russia. No more cargo originating from Russia can be transported towards the EU, which could imply substantial financial losses for European companies. On top of that, the industry expects the decisions regarding the sanctions on Belarus to see the overall impact on rail freight and the New Silk Road.

3 comments op “EU imposes sanctions on Russia, what do they mean for rail freight?”

What long & short term effects could come from the serious multiplier effects, for US/GB & EU/Asian economies, from the ongoing challenge to America’s “exorbitant privilege”, a result of the need to replace the USD as a global reserve currency ?

What about company who’s owned by 75% by Russian Railways but still operating on EU and US market? What’s the consequences for them

What about freight forwarding company owned in 75% by russian railways, yet, operating on EU and US market – what’s the consequences for them