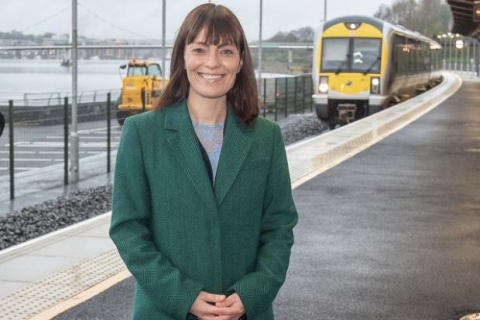 Governments in Belfast and Dublin have reminded all stakeholders that the pubic consultation on the future of Ireland’s railways ends on Friday. The process will inform decisions on the shape of the railway network in both Northern Ireland (part of the UK) and in the Republic of Ireland.

The review of the all-Ireland network will be delivered by consultants Arup, who were appointed in July 2021. It will be overseen by the UK Department of Transport in co-operation with the Department for Infrastructure, and the Northern Irish Translink authority. In the south, the official receiving bodies will be the Irish Commission for Rail Regulation, the National Transport Authority, Iarnród Éireann.

Shape and develop the rail network

The Northern Irish infrastructure minister Nichola Mallon has urged industry and the public to have their say on the future of the all-Ireland rail network before the consultation on the All-Island Strategic Rail Review closes at the end of this week.

Minister Mallon and her counterpart Minister for Transport, Eamon Ryan jointly published a consultation paper on 29 November 2021 to seek feedback from the public and interested stakeholders on how they can shape and develop the rail network across Ireland. The consultation has caught the imagination of lobby groups in the north and the south, and those whose ambitions cross the border, such as the “Into the West” group based in Londonderry in Northern Ireland who seek to have connections reinstated with the county of Donegal in the Republic.

Stakeholders are bing encouraged to put forward views on rail freight in Northern Ireland. The UK territory has not seen any freight activity in several decades. In the Republic of Ireland, many freight customers are keen to see services extended, and infrastructure upgraded or reinstated, especially in the south and west of the country.

“Rail is an issue I am very passionate about and I believe it has massive untapped potential to deliver across our island”, said Nicola Mallon. ”There are real opportunities for communities across Ireland and significant benefits that better connections could bring not just to people but also for our environment and economy. The All-Island Strategic Rail Review will help inform our decision making and investment in our rail network for years to come.”

The intention to carry out an All-Island Strategic Rail Review was announced by Minister Mallon and Minister Ryan in April 2021. The Review reflects an Irish Government commitment under the “New Decade, New Approach” agreement between the Irish and UK Governments.

The Review will consider the rail network on the island of Ireland with regard to sustainable connectivity between the major cities, enhancing regional accessibility, supporting balanced regional development and considering rail connectivity to international gateways – sea and air ports, which will include examining the role of rail freight.