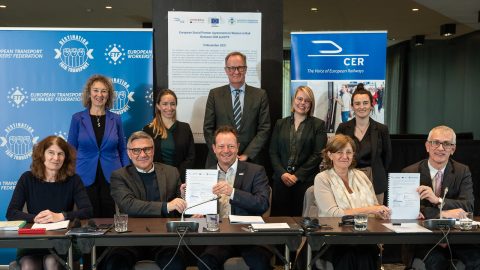 A new era starts for women in rail

CER and ETF have officially signed the Women in Rail agreement which is ready for implementation right away. The agreement focuses on promoting women in the sector, from the recruitment process, female employee retention and promotion, to enabling them to access management levels.

Are equal opportunities and safety between men and women an obsolete discussion topic? It seems not for the rail freight sector, which is male-dominated. The Community of European Railway and Infrastructure Companies (CER) and the European Transport Workers’ Federation (EFT) are willing to change the situation.

With the autonomous Women in Rail agreement, they want to promote women’s employment in the rail sector and create a safe environment for them, away from harassment and with equal opportunities for career development. The agreement has been in effect since Friday, 5 November. Companies will have 12 months to establish a gender and diversity policy and 24 months to implement it.

Long process to the agreement

CER and EFT went through seven rounds of negotiations until reaching the first phase of the agreement. In June, the two parties agreed to proceed with the agreement’s adoption on a verbal level. Its official adoption by CER in late September and the positive vote from EFT on 27 October made it officially valid.

The agreement’s signing ceremony was attended by Joost Korte, director-general of the directorate-general for employment, social affairs and inclusion, and Charlotte Norlund-Matthiessen from Commissioner’s Adina Valean’s cabinet. They both welcomed the agreement and underlined that it is a significant development, especially because it was achieved during the EU Year of Rail.

Below you can watch a video produced by CER and EFT concerning the agreement.