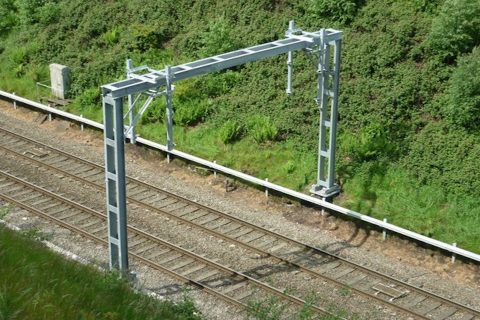 The UK is electrifying its railway at less than half the rate needed to decarbonise by 2050, according to the Railway Industry Association, the representative body for the entire supply chain. There is concern that the UK government will further cut back its ambitions in a short-term measure to curb expenditure in the post-pandemic period and balance the public spending accounts.

New data has been published from the Office of Rail and Road (ORR) showing that the UK is not electrifying its railways quickly enough to meet the UK government’s legislated ambition to reach a net-zero carbon economy by 2050. The statistical release from the independently appointed regulator shows that in 2020-21, 179 track kilometres were electrified, less than half the 448 kilometres required each year to meet Network Rail’s target of a net-zero carbon railway by 2050.

The new figures have been seized upon by the RIA, which has long been a champion of electrification and technical innovation within the rail industry. “New data shows that the UK electrified some 179 track kilometres in 2020-21, mostly on completing the Midland Mainline upgrade between Bedford and Corby”, said David Clarke, Technical Director of the Railway Industry Association, who authored the Electrification Cost Challenge Report in 2019. “According to Network Rail’s Decarbonisation Strategy, we need to deliver 13,000 kilometres of electrification by 2050, meaning we need to be electrifying around 400 kilometres a year, more than double the rate we’re currently doing.”

Clarke was also critical of the planning agenda, saying it gives little prospect of meeting the target in the long term. “With no major schemes coming down the line, we can reasonably expect that there will be less work, not more, in the coming year.” The project to which he referred in his example is the scheme to electrify the line from London St Pancras station, which was originally intended to reach all the way to the city of Sheffield in Yorkshire, but has been cut back to only serve metro and outer-suburban services from London, leaving inter-city services to Derby, Nottingham and Sheffield, and dashing hopes of an electrified freight alternative to the busy East and West Coast main lines.

Energy issues in the UK

“The Railway Industry Association has long called for a sustainable, cost-effective programme of electrification, alongside support for battery and hydrogen-powered trains”, said Clarke, who added that such measures were vital to meet the Government’s Net Zero target by 2050. He says that approach which was endorsed in the Government’s own Transport Decarbonisation Plan, published in July. “At the current rate, we are unlikely to meet that target”, he said.

The disappointing figures come just as the UK is facing severe problems in the energy supply chain. Gas supply issues have put a strain on electricity generation, forcing energy-intensive industry at large to consider reducing electricity consumption and, ironically, forcing some rail freight operators to rethink their traction policies.

Crucially, say the RIA, the industry is also losing expertise and capabilities whilst electrification schemes are stalled. “It will be harder to deliver the considerable amount of work needed if and when new projects are started”, says Clarke. “We need to get a programme of electrification work underway today, so we can decarbonise the network, bring greater benefits to passengers and freight users, and support the UK economy.”

In advance of the COP26 Conference in Glasgow next month, the UK government has been at pains to emphasise its intention to ‘build back better’ – a catchphrase coined by Prime Minister Johnson for a post-pandemic economic recovery programme. However, critics have claimed there has been little more to show for the ambition than the slogan. With electric locomotives mothballed, and electrification programmes in England stalled, the only thing that’s net-zero so far, say the critics, is progress.

Mr.Walton is correct on multiple points. A whopping amount of unnecessary expense has been incurred in, e.g., the Great Western misadventure, because experience (i.e. knowledge) gained during last century’s electrification progress was lost due to the passage of time and consequent loss of expertise. We’re having to learn to walk – sorry: wire – again!

Politicians know what they are doing. Westminster is full of saboteurs be it railways energy generation fuel efficiency industrial strategy etc.

The Politicians know what they are doing. If it’s not London then they are not interested