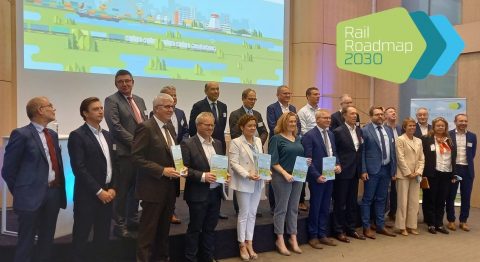 More than twenty organisations in Belgium, including the Flemish ports, Infrabel and VBO, have presented the Rail Roadmap 2030. In this document they indicate which steps must be taken to enable a doubling of rail transport in the next ten years. Longer trains, digitisation and electrification of the track in the port of Antwerp are part of the plan.

In order to guarantee mobility and make transport more sustainable, the Belgian government aims to double rail transport from ten to twenty per cent by 2030. The concrete plans to achieve these objectives were unclear for a long time. That changed on Tuesday, when the Rail Roadmap 2030 was presented.

In the document, to which seaports, inland ports, road transport and rail federations, employers’ organisations and Infrabel contributed, concrete suggestions are made to enable the doubling of freight transport by rail by 2030. Digitisation, collaboration and infrastructural changes to the track are keywords in the document.

Infrabel CEO Gilson indicated during the presentation that the infra manager is doing everything it can to optimise the service through digitisation. He acknowledges that this is a weak point of the service. It is precisely the lack of customer service and flexibility that is seen in the industry as one of the biggest points of attention for rail transport, says professor Thierry Vanelslander of the University of Antwerp during his presentation. “It is important to do something about this.”

Digitisation could make the service more customer-friendly, for example by making it possible to book rail freight online and track and trace the goods. Digitisation and data analysis in capacity management could also contribute to better utilisation of the existing rail infrastructure.

Report authors also agree that the infrastructure needs a thorough facelift. “It is important to first catch up and eliminate missing links”, says Pauwels during his presentation. For example, he believes that the connection of ports and industrial sites to the main track deserves the necessary attention in the coming years.

This is one of the reasons why the share of rail transport in the hinterland connection in the port of Antwerp is only seven per cent, while the port of Hamburg, for example, records more than 40 per cent.

Money is needed for the realisation of the plans and the actors look to the government. No statements are made about concrete amounts, “but every euro spent yields three euros”, said Pieter Timmermans, CEO of the FEB and host of the meeting.

“Once the goods are on the train, the train is competitive with road transport. Especially when it comes to longer distances”, adds Geert Pauwels. “But the competitive disadvantage of train transport lies in getting the goods on board: bundling goods, transhipment and the first and last mile.”

The actors ask the government to make financial resources available to overcome this disadvantage and to facilitate the modal shift. How this should be done in concrete terms is not clarified in the document. Transport organisation Febetra has previously proposed to make a transfer check of 40 euros available to companies that transfer goods from road to rail.

In order to increase capacity, the actors are also asking for longer trains to be allowed on the track. By allowing a length of 740 meters, instead of the current 550 meters that is now allowed, the capacity of the train will increase and the competitive position will improve. Shippers can also be lured to the track with this.

When asked whether a doubling of rail transport is possible, Pauwels answers: “The question is not so much whether it is possible. It’s just sheer necessity. Roads are closing and CO2 emissions have to be reduced. With the preparation of the Rail Roadmap 2030, in which all railway parties were involved, the sector is coming up with a joint answer for the first time and that is a hopeful thing.