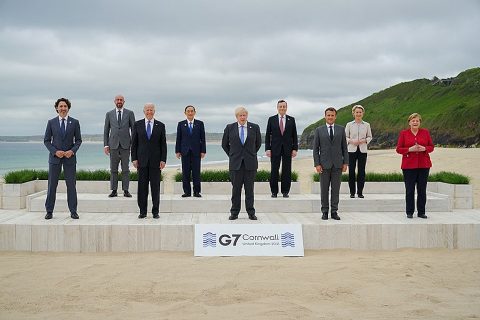 The UK can show international leadership by taking decisions on railway decarbonisation this year. That is the message to G7 leaders from the Railway Industry Association, the body representing the supply chain in the UK. The Association has delivered its message as the meeting of world economic leaders, commonly known as the G7, wound up in Cornwall, south west England at the weekend.

Despite mass arrivals by jet and helicopter – the Railway Industry Association (RIA), the national trade body for the UK rail supply chain, has encouraged Britain, as current presiding nation, to lead the world on decarbonisation, particularly in the rail industry. The Cornish seaside resort of Cardis Bay, where the G7 Meeting was held is rail served – by diesel.

With national leaders from the G7 meeting in Cornwall Friday to Sunday (11-13 June), the RIA called for the UK to show global leadership on climate change by investing in rail decarbonisation. Darren Caplan, Chief Executive of the Railway Industry Association (RIA), said that with the G7 Summit taking place in Cornwall, the UK Prime Minister Boris Johnson’s call for a”‘Marshall Plan for climate change” needed to be backed up with specific action. Johnson’s remarks alluded to the vast programme of relief committed to Europe in the aftermath of the Second World War. Among the most significant successes of the programme was the rebuild and modernisation of continental Europe’s railway network.

“The Railway Industry Association and our members support the (Department for Transport) DfT’s work to cut emissions from transport, including developing a Transport Decarbonisation Plan to achieve net zero emissions by 2050”, said Caplan. “However, the most impactful action the Government can take as the UK hosts the G7, and also COP26 in the autumn, is to immediately kick-start a rolling programme of electrification and commit to fleet orders of hydrogen and battery powered trains, as we have been calling for in our RailDecarb21 campaign.”

The UK government may be forgiven for complaining that Britain is ahead of many parts of the world, and certainly far in advance of decarbonisation of the biggest G7 partner. President Joe Biden can only point to a tiny fraction of North American freight operations that are electrified. The Iowa Traction Railway at 10.4 miles (16.7 km), and the Deseret Power Railroad (33 miles – 53 km) are the only active systems. The latter ironically exists solely to convey rather carbon-unfriendly coal from a mining complex to a power generating station. In a somewhat retrograde step, an isolated railway on a native American reservation within New Mexico is currently being converted … to diesel operation.

However, Caplan and the RIA say Britain could do more. “At a time when the UK has 38 per cent rail network electrification and other G7 countries like Germany have over 60 per cent, the Government really can show genuine leadership to its international partners if it takes up the cudgels on this straight away”, says Caplan. “By acting strongly and decisively in 2021, rail will not only help the UK to achieve its green transport ambitions, but it will also give more weight to the Government’s call for other countries to follow suit when it comes to decarbonising their transport networks around the world.”

Despite the Carbis Bay station on the short St Ives Bay Line, being within walking distance of the G7 meeting place, none of the world’s leaders chose to be environmentally friendly, and take the train. That has not stopped development in the region, with passenger train carried freight being pioneered in Cornwall.

The line did have considerable traffic for goods until the 1960s. Fish and parcels being the mainstays. There were sidings at Lelant Wharf and at the terminus of St Ives. Today, although the line is single track throughout, it may support light logistics on existing passenger services. Any such plans may be restricted to the junction with the Cornish main line at St Erth, 4.25 miles away (6.8 km).

Featured image: G7? Seems to be nine, but what would we know about world economic forums. Image credit Joe Biden / Executive Office of the President of the United States