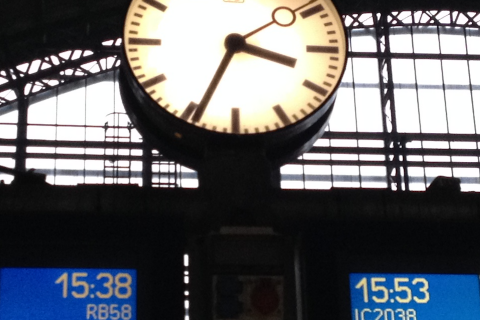 The Rail Industry Association, the representative body for the rail supply chain in the UK, has asked the UK government when they can expect the next update on the Rail Network Enhancements Pipeline (RNEP). They say the annual update is over one hundred days overdue. For the sake of the industry, the RIA say their members need a planning update on projects like the Castlefield Corridor in Manchester.

According to the RIA, the UK government undertook to update progress on the RNEP annually. However, the last update for England and Wales was published in autumn 2019 (the developed government in Scotland writes its own rail policy). The RIA says the industry needs some guidance in order to plan for the future. They say it is a vital part of post pandemic economic recovery, and should be given priority.

The Rail network enhancements pipeline (RNEP), says the UK government Department for Transport (DfT), is a new approach for rail proposals that require government funding. “This approach creates a rolling programme of investment, focused on outcomes that provide benefits for passengers, freight users and the economy.” They say it moves government investment in enhancements away from what was previously a rigid five year cycle, tied to so-called ‘control-periods’ of the infrastructure management agency Network Rail.

However, the Railway Industry Association has been running an ‘Enhancements Clock’, which has tracked the time taken since the Department for Transport published the list of projects, which was last updated on 21 October 2019. At the time, says the association, the DfT also promised to publish the list on an annual basis. As well as representing the supply chain, the RIA comments on rail issues across the UK, including recently the call for support for Eurostar.

Whilst the RIA say they understand the Coronavirus pandemic has made things incredibly difficult, they want clarity for the supply sector. They make it clear they are not seeking funding, but are asking the UK government to publish an update, so that railway businesses have the visibility to plan for whatever future work is going to be in the short to medium term pipeline.

Darren Caplan, the chief executive of the RIA, said that his members are concerned that another milestone has passed on publishing an update of the Rail Network Enhancements Pipeline list. “Whilst we are not doubting the support the Government has given the industry over the past year, and we of course recognise the huge impact of the Coronavirus pandemic, rail businesses are simply calling for no more than visibility on the Government’s thinking on upcoming projects, following repeated commitments to keep the supply sector updated on their progress. This is not about budget, it is simply a call for clarity on future work, whatever that thinking is.”

Caplan goers on to say that last year saw the transport minister Grant Shapps and his department engage positively with the railway industry. “UK rail welcomes the Government’s support to keep the network running through the pandemic. We urge the Government to continue this constructive engagement with rail, and to let us know it’s thinking on the RNEP as soon as possible. These schemes – including new tracks or electrification of routes – are vital in ensuring the rail industry not just builds the world-class railway of the future but also supports current jobs, investment and economic growth at an essential time for the economy.”

The Rail Network Enhancements Pipeline process runs to a bewildering chain of onomatopoeia, with five different levels of governmental assessment. A project has to go from Determine, Develop and Design, to Deliver and Deploy, before any train may actually run. The DfT document handles the first three stages, before projects enter into Network Rail’s Enhancements Delivery Plan. Schemes already at that stage include extra capacity on the branch line serving the intermodal port of Felixstowe; gauge enhancements for the route between Doncaster and Immingham to allow access for intermodal traffic; capacity improvements across the Transpennine route; and structural enhancements to allow heavier bulk trains from the Peak Forest area to serve the construction industry around London.

Many more projects, with implications for freight traffic are still in the RNEP process. The UK government however states that there is flexibility. “The governance process is not rigid, and is intended to reflect the maturity of a scheme”, says a statement in the Department for Transport document listing current projects. “A brand-new scheme may enter at the ‘Decision to Initiate’ gateway to unlock funding for a Strategic Outline Business Case, and move through each subsequent gateway to delivery, and finally deployment. However, schemes which are considerably more mature, or have been part developed by a third party, may enter the pipeline at the ‘Decision to Develop’, ‘Decision to Design’ or ‘Decision to Deliver’ gateway.”

Not much consolation for an intermodal driver waiting for access to Manchester’s Castlefield Corridor – still at the initial ‘Determine’ stage. As the Railway Industry Association may say, the clock is ticking.