Only a few EU Member States will respond to the call of new EU legislation, allowing for a waiver, reduction or deferral of track access charges as long as the pandemic lasts. There may be little willingness to implement this, as the general economic state of most countries is not at its best at the moment. This was the conclusion of several experts during the Track Access Charges Summit, held on 14 and 15 October.

On 12 October, the regulation was published in the Official Journal of the European Union. “This means the legislation is now in place. Only now Member States are able to implement this measure”, explains Libor Lochman, Executive Director of the CER. In other words, we are not able to say with certainty which countries will act upon the encouragement of Brussels. “But, there are several member states that have already said they will not implement this regulation”, the CER director said during the summit.

Rail freight volumes have decreased with around 30 per cent this year. It is currently unclear when these volumes will rise again. Especially smaller and private carriers are facing challenges to continue operations. Support from the governments is desired, in order to ensure that the crisis does not lead to systematic damage. This regulation allows for a new channel of support.

WIth this measure, railway undertakings would temporarily be alleviated, as their costs would decrease significantly. However, infrastructure managers will miss income and this must be compensated. “Compensation that must come from the Member States”, explains Lochman. This is where the implementation becomes a challenge.

No appetite for this

“The approach of the Member States depends on the economic situation of the country. If there is a robust budget that allows to compensate the infrastructure managers for the losses incurred, then there should be the readiness to apply this and put it in place, because that would be a relief for the railway undertakings.

“But we are also realistic. The current crisis affects the economy of almost all the member states, so there may not be the appetite or the reserves that would allow for the implementation of this regulation, and put in place the deduction or referral of the track access charges. We expect a number of member states to do it, but also a portion that will say: we simply cannot do this.

There are a few countries that have expressed interest in the implementation. End of August, the French Prime Minister Jean Castex announced that France will waive track access charges for the remainder of 2020 and cut them in half for all of 2021, once the Regulation would be in place. Similarly, the Austrian government wants to support rail freight operators with a discount on the user charges for the rail infrastructure, it announced on 8 August. Belgium is considering the measures.

On the other side of the spectrum is for example in Croatia, where the chances of seeing the charges of railways go down are very low. This is if you ask Borna Abramović, who works as an associate professor at the Faculty of Transport and Traffic Sciences, of the University of Zagreb. “I can give a straightforward answer, this will not happen in Croatia”, he said during the Track Access Charges Summit. “If we lower the track access charges now, what will happen in two years, when we go back to normal pricing? Railway undertakings will say ‘we already have a price, why to change it again?’ We must be wise and think of the future.”

According to Abramović, it is a cat and mouse game, one that also concerns Mirjana Bugarinovic from Serbia. She works as an associate professor at the Faculty of Transport and Traffic Engineering of the University of Belgrade, and spoke of the prospects in her country. “If you support one side, the problem shifts to the next party. If you give money to the infrastructure managers, you will also need to give money to the operators. The cash will just flow in a circle.”

“We are all in the same scenario”, said María Álvarez Cuadrado, International Corridors and Networks Manager at ADIF, the infrastructure manager of Spain. “We all want to foster railway traffic. It is a good measure, but we need to take into account that someone needs to balance our figures. As infrastructure managers, we should have black numbers, which means that governments should help us. If we don’t charge, we should have a subsidy from the Member States. It is a good measure, but it has to be balanced between all actors”, she said during the summit.

Do you want to watch a part of the discussion about this topic during the Track Access Charges? It was broadcasted during last week’s RailFreight Live. 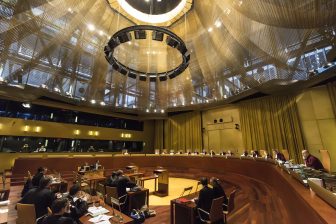 Railfreight Live: No sanctions for noisy trains in Germany

Rail freight is synonymous with a sustainable European future. Grabbing the opportunities offered after the Covid-19 pandemic to improve the sector is of central importance. These are some of the insights provided at the event...Read more