The German traffic minister, Andreas Scheuer, has given a strong warning to the chief executive of Deutsche Bahn. A sound plan must be presented within three week’s time, explaining how to put things right at DB Cargo, among other things. Scheuer has summoned DB boss Richard Lutz by letter to indicate by 14 November at the latest how the increasing delays in both passenger and freight transport will be counteracted.

DB Cargo faces idle trains, poor equipment, a staff shortage and a ‘non-functioning production structure, says Scheuer in his letter, which has been intercepted by Deutsche Presse Agentur news agency. The traffic minister himself is under heavy political pressure to finally intervene with Deutsche Bahn, a wholly-owned subsidiary of the German state.

Deutsche Bahn has been underperforming for years. While its rail freight division has been loss making, passenger transport has had to deal with continuous delays. In addition, DB is also responsible for the investments in maintenance and construction of the track. In fact, the state has had to jump in for years, because the cash flow at the rail company does not fully cover the investments to be made.

Scheuer apparently has had enough with “the Bahn”, in particular the way in which the group is managed, while failing to get everything in order. In his letter to Lutz, the minister insists on “far-reaching changes”. He talks about “inefficient tiers of government”. He believes that they should make way for a “well-organised hierarchy,” to make “easier decision-making” possible.

In freight transport, DB is struggling with declining transport directly from and to production centers, with one or a few of its railcars. This capillary transport, in which entire trains have to be assembled elsewhere, has long been a loss-making business. DB Cargo de facto seizes the total revenue of the entire group.

The Bundesrechnungshof, the General Audit Chamber of Germany, has insisted twice that DB’s corporate structure be completely overhauled. For example, the logistics subsidiary, DB Schenker, should be sold to alleviate the large debt burden of the entire group, estimated at around twenty billion euros.

The Court of Audit considers DB Schenker a “Fremdkörper” within a group that should focus on the general interest of good and reliable national rail transport of travelers and goods. The sale of the logistics business unit would release money to finance much-needed investments in the rail network.

Deutsche Bahn is currently selling the foreign passenger division Arriva. However, it does not seem to provide approximately sufficient returns to solve the financing problems of the entire group. In recent years, the German state has repeatedly called for more structural measures at DB. This produced “strategic” plans for the day-to-day management of the group, which, however, have contributed little or nothing to improving the results.

The patience at Scheuer now seems to be running out. In his ultimatum to DB chief Lutz, he has not mentioned anything about sanctions in case Lutz fails to take concrete measures on 14 November.

“No cosmetic, but real reform of Deutsche Bahn” 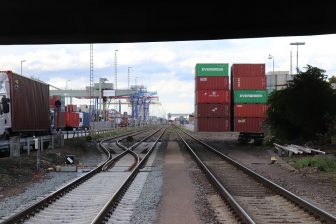