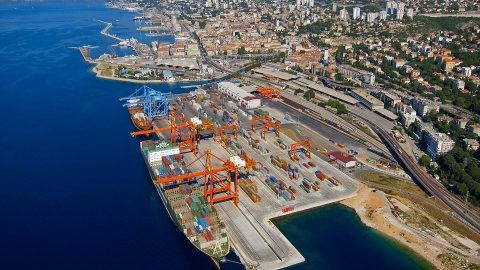 The port of Rijeka, the largest harbour in Croatia, intends to enlarge the intermodal facilities of the Zagreb Deep Sea Container Terminal. To this end, the port authority invests in the development of the railway infrastructure. The modernisation project will increase the capacity of port to handle containers and make the intermodal terminal the largest in the Northern Adriatic.

The project costs 31.6 million Euros, of which 85 per cent -26.8 million Euros- is funded by the Connecting Europe Facility (CEF), a EU fund for transportation projects. The civil works will be performed by SŽ–Železniško gradbeno podetje Ljubljana (SŽ-ŽGP), the Slovenian contractor specialised in track maintenance and construction.

The agreement between the Slovenian company and two customers, Port of Rijeka Authority and HŽ Infrastruktura (the Croatian rail infrastructure manager), was signed in Rijeka at the beginning of July. SŽ-ŽGP must complete the project in 2022. “In 2022 the port of Rijeka will become the port with the largest container capacity in the Northern Adriatic”, said Denis Vukorepa, director of the Port of Rijeka Authority.

The modernisation project consists of three stages. The first one provides the reconstruction of the cargo section of Rijeka railway station. The works at this stage include the upgrade and extension of 12 tracks as well as the installation of the cable drainage, telecommunication and power cables along the tracks. At the second phase, SŽ-ŽGP will construct the rail connections between the modernised railway lines and install the cable drainage. The final stage includes the construction of four 400-metre tracks on an extension of the container terminal and two tracks for portal cranes. All is aimed at removing the railway bottlenecks in the port of Rijeka and stimulating the road-to-rail shift.

Moreover, HŽ Infrastruktura plans other improvements on the Croatian network in the coming years. The company will modernise several sections of the Zagreb – Rijeka railway. These works will be also co-financed with EU funds.