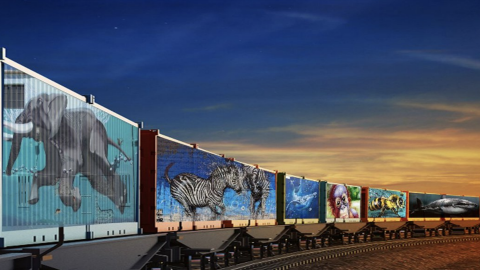 Noah’s Train arrives today at its final destination in Brussels after a two-month journey through Europe. It is the world’s longest transformative mobile artwork, decorated by prominent local street artists in each of the five cities on route.

When the train was launched in Katowice on 14 December, the containers coloured bright green. This was the train before it was transformed. The first works were carried out in the Polish city, similtanously with the signing of the Rail Freight Forward coalition. Since then, it traveled to Vienna (14/1), Berlin (24/1) and Paris (5/2), each time depicting more art. On 20 February, it arrives at platform 3 in Schaarbeek, Brussels. The expected time of arrival: 11.30 AM.

Noah’s Train symbolises the start of the Rail Freight Forward coalition, a commitment of European rail freight companies to reduce the negative impact of freight transport on the planet. The key objective is a modal share of 30 per cent for rail by 2030. Currently, the share of rail in overall freight transport is 18 per cent.

The signatories have committed to transforming their sector. Today, they will present the European rail freight manifest ‘30 by 2030 in Brussels. Here, the Belgian rail freight industry will also deliver the Belgian Rail Freight Memorandum.

Earlier, the signatories explained that they will drive efficiency and standardisation, improve cost-effectiveness and accelerate technological innovation. Each company will step up its efforts to offer competitive products that convince customers to choose rail for its quality, frequency, reliability, flexibility, price and service, they promised.

At the same time, Rail Freight Forward calls upon policymakers and key stakeholders to work together in implementing the external conditions needed for a successful modal shift. For example, the development of a competitive rail offering goes hand in hand with that of a rail infrastructure which makes running a train through Europe as easy as running a truck. This requires a clear mandate for infrastructure managers to deploy a network that is easy to access, well-managed and reliable.

Secondly, national and EU authorities are called upon to provide a transparent and solid regulatory framework for infrastructure managers to realise this network. The coalition further asks that the authorities equalise taxes, administrative costs and infrastructure access charges for the different modes of transport, thereby levelling the playing field for trains and trucks. “Countries taking measures to provide a clear regulatory framework and fair competition, such as Austria (32%) and Switzerland (37%), clearly show a larger modal share of rail”, the coalition pointed out.