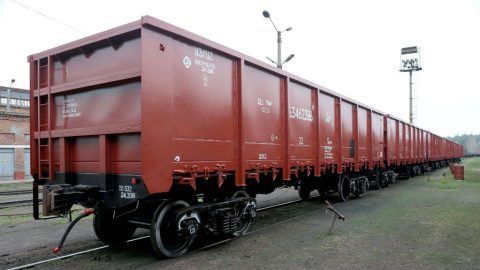 The European Bank for Reconstruction and Development (EBRD) will provide a loan of 133 million Euros to Ukrainian Railways for purchasing 6,500 open wagons. The first units are expected to deliver by the year’s end and will be completed within six months from the date of signing supply contracts.

The agreement between EBRD and Ukrainian Railways (Ukrzaliznytsia) was signed on 9 November. The loan includes a two-year grace period, and repayment will start on 20 October of 2020. The wagon supplier will be chosen via a procurement procedure, most likely, among large Ukrainian rolling stock manufacturers Kryukov Railway Car Building Works, JSC Dneprovagonmash or Popasna railcar repair plant. The latter has delivered open wagons to Ukrainian Railways in previous years. All the railcars will be transferred to UZ Cargo Wagon LLC, a subsidiary of Ukrainian Railways.

The bank will also finance the corporate governance reforms of Ukraine’s national railway company. “The development and implementation of a Corporate Governance Action Plan and an Anti-Corruption Action Plan will introduce measures such as the appointment of independent directors, business planning, the establishment of an audit committee, an internal audit function and anti-corruption measures, making it a benchmark for other state-owned enterprises in Ukraine,” reported EBRD in official statement.

Moreover, the bank invested in the modernisation of Ukraine Railway’s infrastructure. The Beskyd tunnel in the Carpathian Mountains, opened in May 2018, was constructed with EBRD and EIB loans. Also, a 150 million Euros loan was signed in December 2017 to finance the electrification of the Dolynska-Mykolaiv-Kolosivka line. The works are expected to start in March 2019 and will be completed by May 2023.