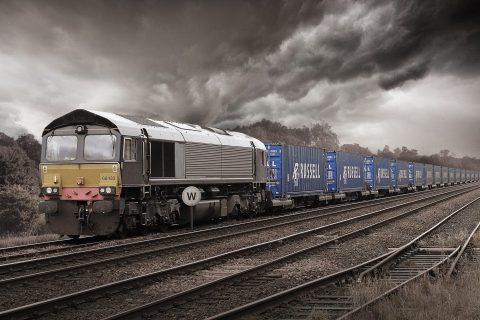 The growth of rail freight in the UK is being hampered by delays to infrastructure works. That’s the message which Maggie Simpson, Executive Director of the Rail Freight Group, has delivered to a government panel on rail infrastructure funding.

She was appearing before MPs on the Parliamentary Transport Select Committee, a sub-division of government which examines specific transport sector issues.

Ms Simpson faced questions about the freight sector’s experiences on a range of issues related to the impact of funding streams. Asked whether a postponement of infrastructure renewals and enhancements had impacted on RFG members, she said the freight sector had been ‘very lucky’ to have been provided by government with a strategic freight network fund in England and Wales.

“Having it as a fund, the current control period fund is just short of £240 million. It’s able to be managed flexibly, so if some schemes do underspend that money can be redeployed for the benefit of freight customers onto other projects,” she said.

Ms Simpson then highlighted several examples of where there had been deferred enhancements to the network: “These have all had impacts on freight outputs, the effect of which the Government has spent some money on some schemes for which it is not getting an output, and obviously freight growth is hampered by that.”

But she added: “I have to say that in the last year, for those schemes which are still being progressed in the portfolio, we have seen a renewed energy at Network Rail and some of the schemes are being better progressed. There is better management and some real pragmatism actually at work in one or two places, so I do see things being better managed in that portfolio now.”

The session was the first of five planned oral evidence sessions on rail infrastructure investment, and will hear from more supply chain companies and freight & passenger operators. Issues include problems around planning and delivery in the current rail control period (CP5), proposed changes to the CP process and opportunities for and barriers to greater third party investment in rail.

Asked whether she anticipated a high level of renewals in the new control period (due to begin in April 2019) could cause problems for freight operators, Ms Simpson highlighted some of the difficulties in freight and passenger competing for track usage, using the summer period as a example.

“August is a great time for the passengers because they’re all in Marbella or somewhere but it’s a lousy time for freight because intermodal trains are trying to fill the warehouses for Christmas. So one of the difficulties that we have in freight is that we often want to be on the network when the passenger trains aren’t on the network. We want to be there at night. Two thirds of freight trains run at night. Apart from Christmas period, we often have conflict in terms of when we want those possessions.

“But equally you can divert a freight train generally very much more easily than you can divert a passenger train, assuming you have got gauge capability. What I’d like to see is a really strong focus from the system operator on the coordination of engineering work, so that we can go a different way or have the capability upgraded so that we can use alternative routes, and keep running, allowing the passenger businesses to take that blockade or those weekends or whatever it is they want to do. I think there is some work there to be done on that by the system operator.”

Ms Simpson also touched on the issue of track access, describing the setting of charges as ‘critical’: “A rolling programme of assessing freight charges is not something in my or my members’ interests because that is fundamental to the stability of those businesses going forwards,” she said. The Office of Rail and Road is in the midst of a review of TACs as part of the long-term plans for when it sets Network Rail’s charging structure for CP6, from 2019 to 2014.

She was asked by the panel for her solution to a suggested amendment to the control period cycle, either through a longer control period or a rolling programme.

“It’s quite a complicated question I think because there is a link between, for example, calculating what those charges are, you need to know what the costs are, because they are cost-reflective. Therefore you need to know what the OMR profile is to be able to establish the cost of the charges. If you take the renewals bit under some sort of rolling programme, you then start to decouple it from other parts of the control period, that’s why it’s complicated and partially why why I cannot give you a clear answer, or say what the answer is.

Speaking afterwards to RailFreight.com, Ms Simpson said her key message was that government investment in rail freight is key for growth, and also unlocks private sector investment in terminals, wagons, rolling stock and technology, both through providing network capacity and capability for growth, and by giving confidence in the Government’s position on freight.

“Having government investment in a Strategic Freight Network fund is good, because it provides flexibility, safeguards funds for freight and shows a strong message to the market. The new process for enhancements which the DfT have outlined is unclear, and we do not yet know if there will be a freight fund, and are concerned to ensure that, whatever the process, the funding is safeguarded.”

While Network Rail’s devolution to routes has delivered some good outcomes for freight, she said concerns remained over whether the regional routes are really incentivised to work for the best interests of freight.

“DfT’s new proposed Rail Partnership franchises aren’t well defined and we are concerned again over how they can work to ensure a positive outcome for freight,” she added.

The full hearing can be watched via the UK Parliament’s official TV service.

RFG Chairman Tony Berkeley meanwhile has announced he will retire as Chairman at the group’s annual meeting in November. Until then he will continue his work for RFG, including in Brussels as a board member of the European Rail Freight Association.

“It has been a privilege to have worked for RFG and its members in the rail freight sector for some 20 years, but at a time when RFG, under Maggie Simpson’s leadership, is in the best possible state to take on the challenges facing the industry, it is time for me to stand aside and ensure a smooth transition with a new chair.”