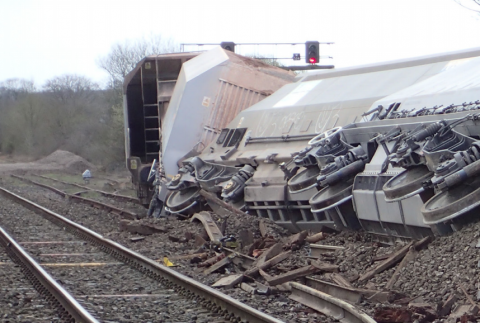 Track fault confirmed as cause of freight derailment

A design fault on a section of track that had already been replaced seven years ago caused a freight train to derail in Somerset earlier this year, an official report has concluded.

There were major delays to freight services as a result of the incident on March 20, with recovery of the derailed wagons taking four days to complete. The report by the Rail Accident Investigation Branch (RAIB) said that a section of track had had a set of points removed, and a curved section added in 2010.

Six of the 38 VTG wagons carrying stone aggregates from a local quarry towards London derailed at East Somerset Junction between Westbury and Castle Cary. The class 59 diesel-electric locomotive-pulled train stopped with the automatic brake system and nobody was injured in the incident.

In all, the RAIB makes four recommendations to negate against the risk of future such incidents. These cover improvements to procedures for plain-lining of points, mitigation of risk at locations where points have previously been plain-lined, improvements to planning the operation of track measurement trains and evaluating the delivery of key track maintenance activities.

The RAIB has also made a ‘learning point’ in which it reinforces the importance of identifying ‘gauge spread’ on sections of curved track that may be subject to high lateral loads.