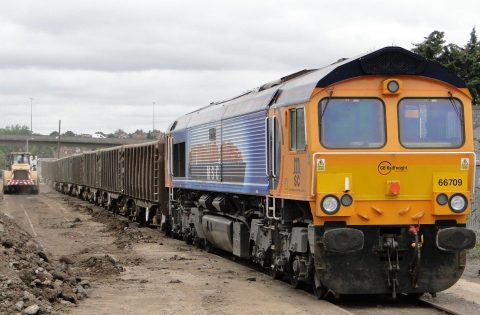 GB Railfreight (GBRf) says it has ‘diminished confidence’ in the Office of Rail and Road (ORR) over its consultation on charges to recover fixed network costs.

The rail freight operator says it ‘objects strongly’ to the increase and introduction of charging on commodities such as electric supply industry (ESI) coal and biomass, and argues that any increase in rail costs will add to the overall increase in energy generation costs. This comes, it adds, at a time when the government is giving serious focus to the cost of energy to the consumer, and would seemingly contradict their efforts to reduce this burden.

As part of its 2018 periodic review (PR18), the ORR is reviewing how access charges and incentives can be improved, the aim of which it says is to ‘improve the decisions’ that Network Rail, train operators and funders make, in order to support better results for freight customers, passengers and the taxpayer. Essentially, it is a review into the way in which the charges operators pay to access the rail network are calculated. A consultation was launched in September and closed at the end of November.

Duncan Clark, Strategic Development Director at GBRf, says: “This consultation is an exercise in buck-passing, with the ORR determining that it is reasonable to pass network inefficiencies on to the rail freight sector in the form of increased or new charges. If fixed network costs were continuing to increase while industry authorities, particularly Network Rail, were becoming more efficient, we might consider an increase in charges as fair, however we do not see any evidence of this.

“The proposals in this consultation risk further undermining the profitability of the rail freight sector at a time when government says it is committed to improving air quality and economic productivity. Introducing measures that would see more freight move onto the road network, or demand reduce for commodities such as biomass as it becomes increasingly expensive to transport, conflicts with these aims and we hope that our response, as well as the responses of the wider rail freight sector, convinces the authorities to not introduce new charges.”

GBRf says the ORR and Network Rail must consider four key areas: long-term charging certainty; sustainability of existing rail contracts based on the ability to guarantee access for freight to the network; potential for further rail freight growth by identifying latent network capacity; and investment linked to incentives.

The company says that the ORR’s proposals, in their current form, show a ‘lack of understanding’ of freight and end user contracts, and the ability of Freight Operating Companies (FOCs) to absorb any mark-up or pass-through. They also demonstrate that there is little evidence of a clear understanding of the actual costs of energy generation from biomass, and with it an inability to develop a fair and reasonable charging model.

“GBRf therefore feels there is diminishing confidence in the ability of ORR to accurately understand the profitability of rail freight haulage in the UK,” adds the company.

The ORR received 23 formal responses to the consultation, including from DB Cargo, the Rail Freight Group, Freightliner, Network Rail, Transport for London, RMT (National Union of Rail Maritime and Transport Workers), and the Freight Transport Association. It says that Network Rail’s efficiency in renewing the rail network is crucial to the value for money that passengers, freight users and taxpayers get from the railway, and that this efficiency has fallen in recent years.