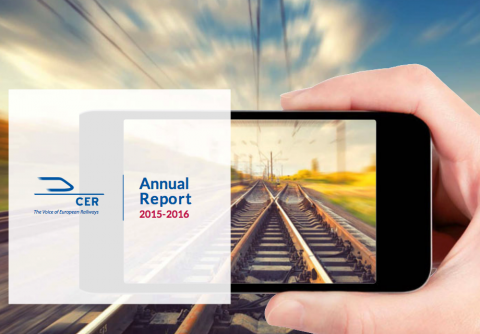 Freight rail policymakers must take ‘full responsibility’ for addressing the intermodal imbalances that still exist in the European rail market if industry professionals’ work is to be rewarded. That’s one of the key conclusions offered by Libor Lochman, Executive Director of the Community of European Railway and Infrastructure Companies (CER), writing in its in annual report.

Giving an overview of the organisation’s main work areas and achievements over the past 18 months, the 2015/2016 report includes a strong focus on the market trends which have affected, and continue to do so, the freight sector.

The CEOs of rail freight companies are, it says, increasingly taking control of the sector’s destiny, in the face of a glut of EU laws imposed over the past few years affecting all sectors of the freight arena. It says that 2015 in particular had been a ‘difficult year’ for the rail freight sector across the continent, with a decline in rail tonne-kilometres of 6.5 per cent. The decline was felt most strongly in the second half of 2015, reflecting the reality that the rail freight market at the time was some 20.2 per cent below the pre-crisis levels of 2008 when the global economic downturn took hold.

Mr Lochman says the Rotterdam Declaration of 2016, which emphasised the importance of establishing the European TEN-T network corridors and broadening its scope to take account of sustainability and digitalisation, had paved the way for a more competitive rail freight arena.

“But of course our efforts will not be truly fruitful unless the legislators take full responsibility for addressing the intermodal imbalances still present in the bigger picture,” he writes. “This is why we are looking with hope and confidence at a number of legislative dossiers that are expected to be published next year.”

These include, he adds, a series of road traffic initiatives announced by the European Commission in 2015 which will affect intermodal competition with rail. The report also examines ways of reducing costs, particularly when faced with the implementation of ‘challenging’ EU laws. Rail freight CEOs, it says, are teaming together to take ‘their destiny into their own hands’.

“Whereas most of these rules aim to improve rail freight competitiveness in the long run, their implementation elicits unexpected costs for rail freight operators in the short and medium term, jeopardising their profitability and and sometimes their very viability.”

Rail freight noise was another issue given special attention in the report, which says while the effect of excessive noise could be considered ‘local’, the same could not be said for the source of the problem: “Today about 50 per cent of rail freight transport is international and the current EU policies aim to increase its volumes further. This means that a large number of wagons run across borders and the noise they emit is therefore a European issue.”

Rail freight noise, it adds, remained therefore a ‘top priority topic’ for the CER: “The EU Agency for Railways is currently assessing the impact of the noise TSI (technical specification for interoperability) scope extension to existing wagons. There is a need for measures that would allow specific noise-related rules in noise-sensitive areas, while retaining flexibility in the areas that are less sensitive to noise and where cast-iron block-equipped wagons could still be operated.”

The annual report can be downloaded from the CER website.