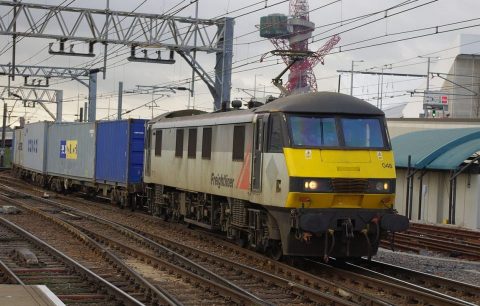 The Rail Freight Group says it is ‘concerned’ at suggestions the budget for rail freight grants in the UK could be reduced. It follows a report that the Government’s mode shift revenue support (MSRS) grant had been cut by a fifth and could be reduced again.

This could mean British roads are hit by up to 190,000 extra lorry journeys every year, as hauliers and logistics companies would find it increasingly expensive to transport goods by rail, according to the Sunday Times.

However Maggie Simpson, Executive Director of the RFG, which represents the interests of and campaigns on behalf of rail freight operators, said: “We are concerned at the potential implications of the decision to reduce the budget for rail freight grants, and have been in discussion with Department for Transport to highlight the issues.

“The overall need for grant support has been reducing over time as rail freight has improved its efficiency, but some routes, in particular the newer retail services still need this vital help.

“The Government’s recently published Rail Freight Strategy sets out their support for rail freight, and reinstating the grant budget would be a welcome demonstration of their commitment,” she added.

The latest round of combined passenger & freight statistics published by the Office of Road and Rail (ORR) show that there was a fall in the percentage of freight trains arriving at their destination within 15 minutes of their scheduled arrival time, 93.3 per cent down from 94.8, in the last quarter of 2016 (October to December).  The next round of statistics detailing just rail freight performance over the period are due to be published by the ORR at the end of February.