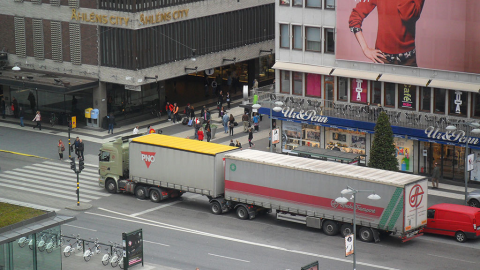 The German Pro-Rail Alliance says it is considering legal action over the Government’s proposals on introducing longer heavy goods vehicles (HGVs) on the nation’s roads without further consultation. One of Europe’s leading rail freight advocates, the alliance says it is siding with the environment ministry in what is an ‘increasingly bitter’ internal dispute.

It follows the German transport ministry’s unilateral decision to allow the 20-25 metre long HGVs to operate regularly from January 1 this year, despite widespread opposition within the Government’s own departments. Jochen Flasbarth, Secretary of State in the Federal Environment Ministry, has publicly criticised Transport Minister Alexander Dobrindt, who made the announcement.

Dirk Flege, Managing Director of the Pro-Rail Alliance, said: “We are looking at taking legal action against transport minister Alexander Dobrindt’s unilateral decision to allow regular operations. When the permanent secretary of state in the federal environment ministry openly says that the federal transport minister’s decision to allow regular operations has created ‘facts on the ground’ that are not compatible with EU regulations, that is a very serious accusation indeed. As a recognised environmental association, we intend to use our legal right to pursue this matter.”

Mr Flasbarth had said that Mr Dobrindt’s ammendment order was ‘not voted on by the government’ and ‘was a mistake in terms of environmental and transport policy’. The ramifications of allowing longer HGVs, their impact on the environment and their effect on rail transport, he added, ‘had all not been sufficient’.

“From the point of the Pro-Rail Alliance it is very revealing when the federal environment ministry confirms that the supporters of longer HGVs, by allowing regular operations, are contradicting the federal government’s own target for shifting more freight from the roads to the railways,” added Dirk Flege: “The so-called Gigaliners are bad news for climate protection, expensive for taxpayers and dangerous for all road users.”

After the conclusion of the five-year trials of longer heavy goods vehicles on designated routes, the Pro-Rail Alliance again emphasised that longer HGVs will damage the environment because by lowering the cost of road transport, freight will be shifted from the railways to the roads, as has already happened in Sweden.

This will result in an increase, not a reduction, in HGVs on Germany’s roads, with forecasts of up to 7,000 additional HGV journeys being made. The environmentally friendly freight railways will be negatively impacted. This is something that the road trials with only a small number of vehicles could not show.

The alliance has consistently provided a strong voice for the merits of rail freight in Europe. It recently welcomed draft legislation put forward by the German government transport for banning noisy freight train wagons after the end of 2020, but at the same time said it should also be pushing for a similar policy across the European Union.