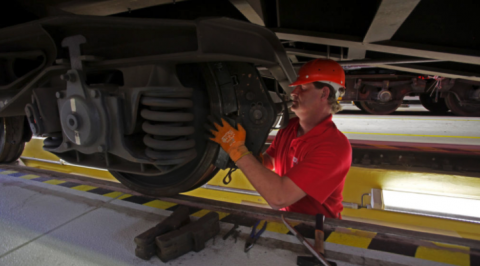 Draft legislation that would ban noisy freight trains in Germany has received the support of a powerful transport lobby group. The German Pro-Rail Alliance says the law, if enacted, would bring relief to the ‘noise plagued people’ living near railway lines.

German Transport Minister Alexander Dobrindt’s announcement that legislation was being planned to ban noisy freight trains after 2020 was, said the Alliance, ‘long overdue.’

“The Pro-Rail Alliance has for years been committed to completely upgrading the rail freight wagon fleet to cut noise levels, and supports the target of halving rail noise by 2020,” said Managing Director of the Alliance, Dirk Flege. “The legislation is also long overdue because the German owners of freight wagons, who have invested considerably in the expensive retrofitting of low-noise brakes, require legal certainty. A strict and unequivocal ban on noisy freight wagons in Germany is the rail sector’s stated wish.”

The draft legislation however contains several exemptions, which have also drawn criticism from the Alliance. Although there would be a general ban on noisy freight wagons, they could be allowed to operate in ‘exceptional circumstances’ by limiting their speed. Exemptions like this are designed to avoid conflicts with European Union law.

Germany is already one of the leading proponents of noise reduction, with an annual budget of around 150 million Euros. It is provided by the federal government for its voluntary federal noise abatement programme (Larmsanierungsprogramm). The European Union says noise pollution is a ‘growing environmental concern’, and has in place a series of measures to limit noise emissions at the source, including the Environmental Noise Directive.

“The draft legislation is trying to achieve a reduction in the noise burden on local residents without coming into conflict with EU regulations,” added Flege. “This is a balancing act that could have unpleasant side-effects. Speed limits on freight trains with noisy wagons will reduce noise emissions but that will cause congestion on the network.”

The Alliance says if EU regulations clash with the legislation to exclude noisy wagons, then the Government should consider including other measures to deter noisy wagons, but without having slow trains clog up the system. “One idea would be to impose a noticeable levy on top of track access charges for the option of operating a slow freight train, taking into account the extra work required for drawing up the timetable,” said Flege. “At the same time, the German government should strive for an EU-wide ban on noisy freight train wagons after 2020, doing away with the need for complicated national exemption rules.”

An English version of the Alliance’s Seven Steps on the Way to Low Noise Rail is available to download.