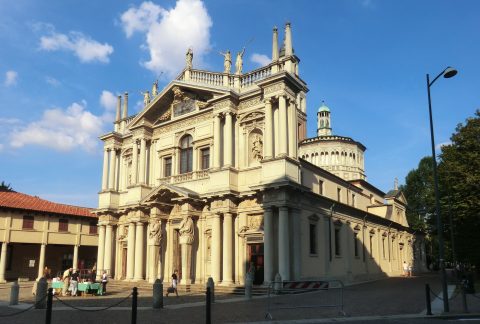 A small city in northern Italy, Saronno, is launching a new idea to make the city greener: last-mile deliveries made by cargobikes. The plan has been devised by Franco Casali, mobility and environment assessor for the city, who had a chat with RailFreight.com. Casali explained how the project could be implemented and what the benefits would be.

The first cornerstone of this idea, as Casali said, is to find an area that can be used to create an interchange platform for heavy and light vehicles. In other words, there is a need for an area where the goods can be moved from the trucks onto the cargo bikes that will carry out the deliveries.

If a suitable location will be identified, the idea will be included in the General Plan for Urban Traffic (PGTU) which has to be submitted before the end of the year. “There are a lot of unutilised or dismissed warehouses, but there are no concrete proposals yet,” said the councilor. Ideally, he added, the platform would be close to one of the two highway exits nearby, Saronno or Origgio.

Saronno is not the only city that has been working on such an idea. In Pesaro, Casali informs us, there is a similar initiative to deliver products to restaurants on the sea shore, and therefore inaccessible by truck, especially during peak season. “There is the size of the city that is different, different characteristics, and so on, but the logic is always the same. You need to find similar situations and work from those,” he commented.

A few Italian cities seem to be keen on similar initiatives. “I talked to the mobility councilor in Reggio Emilia and he is carrying out a study of this kind. He said there are parties that already showed interest,” Casali pointed out. When it comes to Saronno, the councilor highlights that the city is not in the position of renting a warehouse or financing the project. However, he says that a solidarity association let him know they are ready to invest in start-ups involved in similar projects.

What are the benefits for Saronno?

The city in the Varese province has quite a few narrow roads and some limited traffic areas that trucks just cannot access. Trucks or even vans may have problems accessing many streets and their access to ZTLs only damages the stone pavement, increased pollution, and less security for pedestrians and cyclists. In many cases, they are parked irregularly or on the side of the road for the time needed to complete the delivery, leading to traffic congestion, more pollution, and delays in deliveries.

Moreover, the packages delivered are often very light, especially with the recent increase in e-commerce. “This means that 3-tonnes trucks are delivering packages of 300 grams, when you put that in perspective, you realise there is something wrong,” Casali claimed. “Such deliveries could be carried out even on normal bikes. The same thing, with the right proportions, can be applied to heavier cargo as well because cargo bikes can now carry over 400 kilograms,” he concluded.