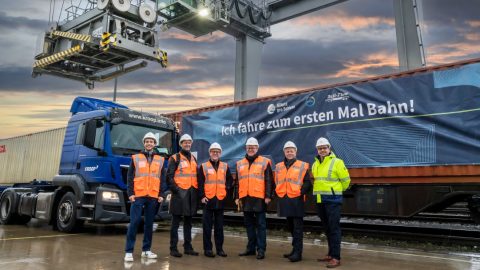 This is how truck companies shift to rail in Germany

How can an exclusively trucking company turn to rail? What incentives need to be in place to experiment with combined transport? German rail association Allianz pro-Schiene has the answer-and it is simplified access via digitalisation. That is how the road logistics company Kroop & Co. Transport + Logistik GmbH transported its first container by rail in late December.

Kroop, based in Hamburg, has been a traditional road transport company with no rail experience. However, in late December 2022, it decided to give rail a chance. For the first time, it set up the transport of a container between the DUSS Hamburg-Billwerder terminal and Nuremberg by train instead of by truck.

“We booked the transport digitally and are very excited about the handling. Combined transport is an interesting alternative to truck transport for us because it is more environmentally friendly and saves us a good 20 per cent of the costs in this specific case,” commented Alexander Kähler, head of the local transport and container transport department at Kroop.

Understandably, the transition to rail, especially for road transport enthusiasts, can’t occur overnight. This is where the Truck2Train project contributed the most. Supported by Allianz pro-Schiene, the Federal Association of Road Haulage, Logistics and Disposal (BGL) and funded by the Federal Ministry for Digital Affairs and Transport (BMDV) with 200,000 euros, the project examines the best practices that can assist small and medium-sized road transport companies shift to combined transport.

“The majority of small and medium-sized transport companies have not even tried out combined transport since most people don’t even know what options are available and what the costs are,” said Dirk Flege, managing director of Allianz pro-Schiene.

“In times of driver shortages and climate change, we hope the joint project will finally lead to better cooperation between road and rail in freight transport. Digital booking portals can become the future in combined transport and thus promote real interlinking of the modes of transport,” continued BGL board spokesman Dirk Engelhardt.

Rail-Flow is the digital mastermind behind ‘Intermodal Capacity Broker’ (ICB) and ‘modility’, the two booking platforms utilised by Truck2Train. “Both platforms make the offers of various providers transparent and broker intermodal transports at national and international levels. This means that truck transport to the train can be booked at the same time as the last mile at the point of arrival to the consignee. This saves transport companies time and effort when they want to use combined transport,” explained Allianz pro-Schiene.

The Truck2Train project has been running for one and a half years and will end in 2023. The parties involved hope its results will function as a blueprint for companies who want to try environmentally friendly transport solutions.

When soundly and sustainably founded, upon a railway proving high quality, yes, then the benefitting of all modes advantages , will be accomplished, at intermodal systems, etc.
However, currently a low quality logistic partner, railways is Weak Link – and now urgently due for a shift.
As short of resiliency and utilised at, or above max., now old obstructing infrastructure railway standards have to be outed.
(Modes resilient and redundant, upgrade for higher loads – and lower costs…)