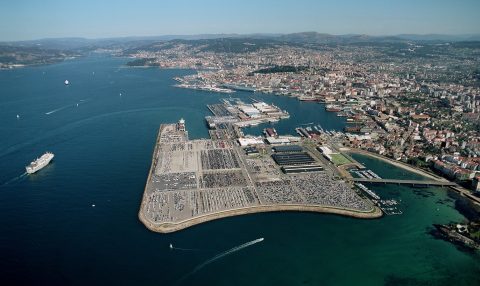 The Bouzas Port Area, in the port of Vigo, in northwestern Spain, will finally be connected to the railway. Eptisa Engineering Services, an engineering company, was awarded the tender for technical assistance to prepare a draft of the interior railway terminal at Bouzas. A rail connection is likely to benefit the Ro-Ro cargo facility in the area, which is the only one in Europe not equipped with a rail connection yet.

Epitsa started its study on 17 October and it will continue over the next five months. The total value of the tender revolves around 17,000 euros. Bouzas is the port’s largest terminal, spreading over 860,000 square metres and it is divided into two areas: a Ro-Ro terminal and a repairs dock.

The decision comes after a meeting between the Vigo Port Authority and the Federation of Port Users, which occurred earlier this month. The parties involved agreed that the Spanish Ministry of Transport should be in charge of the project. However, they brought forward a proposal to link the terminal with the Southern Railway Exit. The project will provide a rail connection between Vigo and Porto and should be completed by 2040, as Raquel Sánchez, the Spanish Ministry of Transport claimed.

Not the first attempt to provide Bouzas with a rail connection

Talks about implementing a rail connection to the Bouzas Port Area started already in 2016, but the Port never got concrete because of a lack of demand from the users of the terminal. Back then, the proposal was to connect Bouzas with the Vigo-Guixar station, fifteen kilometres from the terminal.

However, this proposal was met harshly by the mayor of Vigo, Abel Caballero. At the time, Caballero was quoted saying that he would not allow the Bouzas-Guixar connection via the city. Considering that he is still in office, it remains to be seen whether or not his opinion has shifted or if the proposal will provide new, different solutions that all can agree upon.

The Ro-Ro terminal in Bouzas has five fixed ramps and one mobile ramp for vessel berthing, and an adjoining open-air storage area of some 400,000 square metres. These ramps range from 150 to 369 metres in length and from 8 to 14 metres in depth. Annexed to these ramps there is a huge area of 400,000 square metres for cargo storage. The main activity in this terminal relates to new vehicles, 75 per cent of them for export purposes and the remaining 25 per cent for import.

A railway connection is therefore likely to help the Ro-Ro facility, which has witnessed volume decreases during the first nine months of 2022. Ro-Ro traffic reached 695,886 tons with an annual decline of 10,52 per cent. Moreover, 327,128 automobiles under the merchandise regime were handled, with an annual decrease of 9,19 per cent.

On the other hand, the repair docks cover an area of more than 200,000 square metres dedicated mainly to repair and shipbuilding, where the main companies of the ancillary sector of the mentioned shipyards are located. Ancillary industries are those industries that help both primary and secondary industries by overviewing all phases of the building and repair of all types of ships.