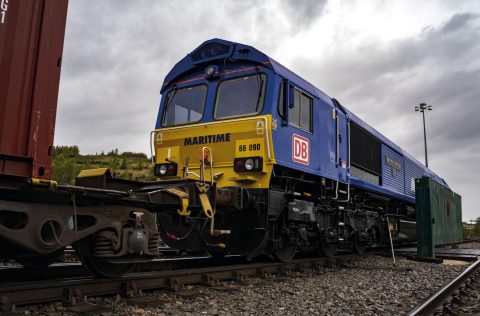 Maritime’s latest working has been in soft launch for three weeks, and the company has made the route its latest firm connection between the Northwest of England and the European short-sea and UK domestic markets. The company says it further supports its commitment to tackling climate change.

The Tilbury to Manchester service runs five days per week from Monday to Friday, capable of moving a full service of intermodal containers, with a total transport capacity of 80 TEU in each direction.

Increasing proportion of freight by rail

This new service continues to build on the long-standing relationship and commitments that Maritime has with both DB Cargo UK and Forth Ports, the operators of Tilbury. “We are very proud to be working with Forth Ports & P&O Ferries and to see the beginning of our Tilbury – Trafford Park service”, said John Bailey, Managing Director – Intermodal and Terminals Maritime Transport. “[The service is further] demonstrating our drive to engineer even more rail freight solutions for the market, and our hands-on approach to reducing not just our own carbon footprint, but that of our customers. Rail is the key to decarbonisation, and we will continue to support modal shift by increasing the proportion of freight transported by rail.”

“We are delighted to be hosting a direct rail link from Tilbury2, which will further increase options for importers and exporters”, said Thorsten Runge, Managing Director – Freight Services, P&O Ferries. Despite the recent controversial staffing issues, which saw crews replaced with agency staff, Runge was optimistic for the future. “We are determined to make P&O Ferries the best ferry company in Europe – the best ships, the best routes, and the best value for freight customers – and providing vitally important trade routes for UK exporters and trading partners is central to our aim of making trade flow.”

The container park can now store up to 4,000 TEU to support increased train throughput. The completed project was unveiled by Andy Burnham, Mayor of Greater Manchester, just two months ago. The company operates from over 40 sites, including a network of six strategic rail freight terminals, with the addition expected soon of the SEGRO Logistics Park Northampton, which is currently under construction.

Fo sake of environment, any “city” port infrastructure, etc., should be awarded high quality, thus the silent, railway tracks – regrettably, now missing….
(For low imposed and radiated energy, now noticed as “noise” etc., the rail pad shall isolate and nearby support be dampened…)
Now “cementing” at current, not sustainable, 22,5 ton “state of the art”, standard, means severe, devastating, bottlenecks…
Short, heavy, silent, trains…, shall be provided for! (35 ton should be min., etc.)