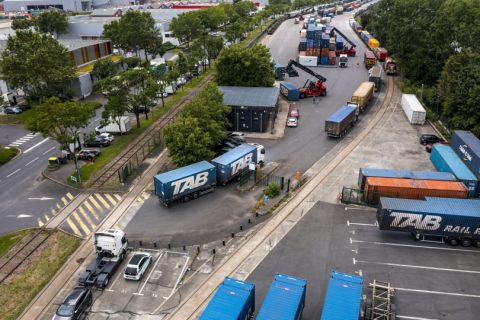 France’s Groupe Open Modal has unveiled plans to build a state-of-the-art intermodal terminal for swap bodies and containers in Miramas, on the outskirts of Marseille. The investment in the project is estimated at over 30 million euros.

The group’s chief executive Jean-Claude Brunier, who has been a prime mover in the sector for many years, told Railfreight.com that work on the facility is expected to start in September this year and that it should be operational by early 2024.

“The backdrop to the project is the growing demand for combined transport terminals in France, where very few have been built in the last 20 years, and the existing ones, historically under the responsibility of SNCF Réseau, do not meet the required level of service,” he said.

Based near Montpellier, in the south of France, the Open Modal group consists of transport company TAB Rail Road, with its fleet of 85 trucks and more than 1,000 swap bodies, combined transport operator T3M, rail company Combirail, and terminal operator BTM.

In 2021, the group transported 115,000 Intermodal Transport Units (ITUs) and is eyeing 8-10 per cent growth in traffic in the current year. It posted a turnover of 119 million euros last year.

More than 60 per cent of Open Modal’s Miramas terminal will be financed through public grants. Its backers include the French state, the Provence Alpes Côte d’Azur region, the Aix-Marseille metropolitan authority and the European Union.

It will be able to accommodate up to 400 ITUs per day, the equivalent of four 850-metre long trains entering and leaving the terminal. In the initial development phase, trains will run between Marseille/Miramas and Paris Bonneuil, Lille and Nancy.

“The terminal will be fully decarbonised and digitalised with operating conditions similar to those of maritime terminals. In short, we will be able to deploy the technologies and know-how that the railways have been short of due to a lack of resources. This will enable us to develop better combined transport in the Rhine Valley nationally and internationally,” explained Brunier.

However, he is highly critical of the chronic problems plaguing the rail freight sector in France and the obstacles preventing the growing demand for combined transport from being met.

“Over the years, the freight sector’s dissatisfaction with SNCF Réseau (the state-owned railway unit that manages the network) has remained constant. The problem with SNCF Réseau is very old and centres on a serious lack of availability of train slots.

Brunier concluded: “Although progress has been made and the state has embarked on a very significant financial effort through its rail freight recovery plan, we are still faced with a quality of service on the network that is still very inadequate. This is at a time when demand from shippers is strong, and we are having difficulty keeping up with it. In some cases, to get additional train slots, we have to start booking them three years in advance.”

In France and all over, regrettably an old, low price, but high cost track design now obstructs. (Slots are reduced by time requested for “maintenance” (repairing of an infrastructure no longer timely).
Electrification, yes, but a timely. Track, basics of railways shall not be Bottleneck, etc., etc., Robustness – and resilency – thus readiness for
a future where shifts, the new normal, shall be provided for!