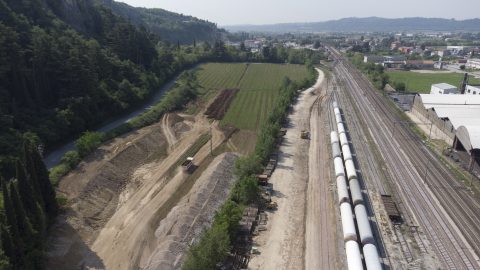 Another intermodal terminal will be available for operations in Northern Italy by the end of 2022. The terminal belongs to Ambrozio Intermodal and will be located at Domegliara, next to Verona. Construction works began in mid-May, and the company expects that the new facility will multiply intermodal capacity along the Brener axis starting by the year’s end when it will start operations.

“The current facilities are insufficient to meet the growing demand for sustainable transport in Europe. Our company has decided to build a new rail terminal in Domegliara to strengthen its combined transport service on the north-south European axis,” said Pieralberto Vecchi, CEO of Ambrogio Intermodal.

Ambrogio Intermodal’s investment in the new location will exceed twelve million euros. It will be the third terminal in Italy owned by the company, next to Candiolo (Turin) and Gallarate (Varese). Ambrogio underlined that Domegliara will become the company’s largest terminal in terms of surface area.

“The project covers an area of over 110,000 square metres and includes five tracks up to 700 metres long, a warehouse and administrative buildings. Intermodal operations are scheduled to begin by the end of this year, with the completion of work on the first three tracks and the yard. A gantry crane will be installed to handle the loading units, together with a reach stacker and two terminal tractors. Upon completion of the project, the operational potential of the new terminal will be more than 3,000 intermodal train pairs per year”, explained Ambrogio Intermodal.

With the 3,000 additional intermodal trains per year, Ambrogio Intermodal seems determined to create the needed facilities to meet the growing transport demand. However, apart from new facilities, the company makes use of older ones. Ambrogio Intermodal has been active in Domegliara, with another terminal, since 2020.

“In 2020, we launched the intermodal connection to Neuss, Germany, operating from the adjacent Valpolicella Railway Terminal. In response to growing demand, this connection has been strengthened in recent months, increasing the frequency from 2 to 3 departures per week in each direction. Thanks to the construction of the new terminal, the transport capacity will grow significantly further”, commented the company.