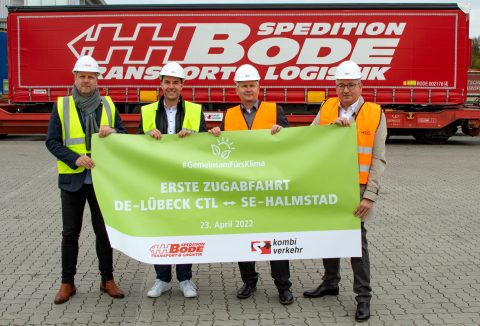 Kombiverkehr has added the portal city of Halmstad to its network of destinations in southern Sweden. A direct train shuttles between Lübeck in Germany to the Swedish port in less than twelve hours, once per week. A second departure is planned for later this year.

The starting point and destination in Sweden is the Port of Halland logistics Centre in Halmstad, while in Lübeck the Lehmann Terminal in Dänischburg acts as a shipping and receiving terminal for trailers, swap bodies and containers.

From there, onward transports are possible via MegaHub Hannover Lehrte to Verona and on to southern Italy as well as to Duisburg, Ludwigshafen, Munich, Rotterdam and Lovosice in the Czech Republic. The trains are tractioned by DB Cargo Scandinavia. The co-initiator of the new train connection is Spedition Bode GmbH & Co. KG, based in Reinfeld in Holstein

The new direct train connection adds a further area in the southern part of Sweden to the existing range of Kombiverkehr services to and from Trelleborg, Malmö, Hallsberg, Gothenburg and Stockholm.

Kombiverkehr sees Sweden as an important intermodal growth market. “Last year alone, we carried more than 50,000 truck consignments on our trains in continental traffic. In addition, there were several thousand consignments transported by rail in broken traffic via the Baltic ports, where the forwarders purchased the ferry service themselves. Together with our customers, we will bring more road transports in the Scandinavian-Mediterranean corridor onto climate-friendly rail”, says Alexander Ochs, Managing Director of Kombiverkehr KG.

According to the calculation of the operator, each transport on the Lübeck – Halmstad connection with a loading weight of 25 tonnes saves the environment 1.2 tonnes of CO2 in a round trip and means a saving of more than 70 per cent compared to road transport.