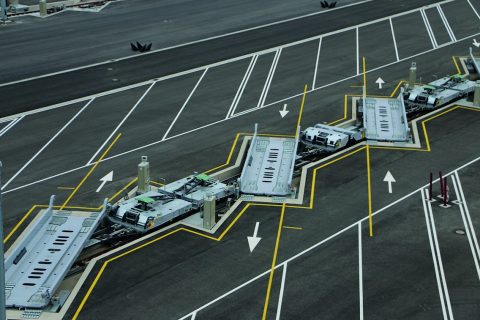 Brittany Ferries has announced the launch of a new ‘rail freight motorway’ service between Cherbourg and Bayonne, a distance of almost 1,000 kilometres, with the aim of linking freight markets in France, the UK, Ireland and Spain.

The company had first unveiled the project back in February 2020, shortly before the COVID-19 health crisis hit and which subsequently led to a drastic reduction in ferry services for nearly two years.

During the hiatus, Brittany Ferries worked with French rail network operator, SNCF Réseau and France’s Environment Ministry, to determine the routing of the new service which will provide daily return trips between the Normandy port of Cherbourg and Bayonne, in the French Basque country, close to the border with Spain.

Following a study into the modification of four railway tunnels on the ‘Atlantic corridor’ route to allow the lowest flat-bed wagons on the market to pass through, a framework agreement was signed, allowing the project to enter its concrete development phase, the company explained.

The launch of the new service, initially planned for 2022, is now earmarked for mid-2024. It has the backing of the French state, the EU and public regional authorities in France. The project will require the construction of two rail freight terminals in Cherbourg and Bayonne-Mouguerre and the acquisition of Lohr Railway System wagons and specialised loading equipment.

Brittany Ferries’ President, Jean-Marc Roué, commented: “As we enter this new phase (of the project), with the signing of the framework agreement between Brittany Ferries and SNCF Réseau, we can now secure the train slots for our services for the first five years of operation.

“Thanks to the support of the French Ministry of Transport, under the presidency of Emmanuel Macron, we are finally able to make these ‘rail motorways’ a reality. During the five-year presidency, the French executive has shown strong and unwavering support for modal shift.

“Shifting freight from road to rail is something that many have talked about. But with this President of the Republic, it’s become a reality, forming part of our recovery plan. I welcome these political decisions which accelerate the future of low-carbon freight transport.”

Brittany Ferries underlined that it was diversifying its freight offering in response to road haulage and logistics companies who were looking to reduce CO2 emissions.

The new, seamless transport of unaccompanied trailers from Ireland (Rosslare) and the UK (Poole and Portsmouth) to the Iberian Peninsula and vice versa, via France’s Atlantic corridor, will reduce the number of trucks transiting France by road by around 25,000 per year. “Brittany Ferries will operate and market the new service, effectively becoming a rail operator,” the company added.

The regular, year-round service, with one return trip, six to seven days per week, will be operated by two trains, each composed of 21 Modalohr UIC wagons with double pockets, allowing 42 trailers to be transported and rolled on and off using specialised horizontal handling equipment.

With parts of the route not currently electrified, initially the trains will be hauled by diesel locomotives. However, in the future these could be replaced by dual-mode locomotives, further reducing emissions.

Journeys have been timetabled to connect with ferry arrival and departure times, whilst also avoiding periods of peak road traffic in Cherbourg.

French national railways concept, the separation of personal and cargo railways, shall be taken advantage of, in all respects -copied, etc.!
National shortlines provides for high quality, On Time deliveries, the requested and by ware owners willingly paid for.
(Regardless of BREXIT, goal of EU membership, benefitting of nearness within hemisphere, shall remain – but has to be provided for – by high quality infrastructure!)