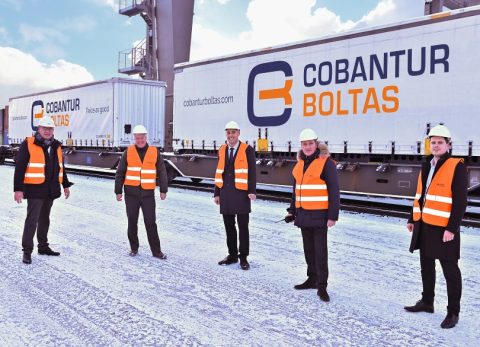 Cobantur Boltas, a Turkish-German logistics company, launched its first intermodal train connecting the Halkali terminal in Istanbul with the DUSS terminal in Munich. The service commenced on 21 January with the first train departing from the DUSS terminal. Trains will run with a weekly roundtrip between the two destinations.

The service involves two more partners; Kombiverkehr and DB Cargo. Kombiverkehr takes care of the rental of wagons and replacement wagons, terminal services, round-the-clock train monitoring and order management. At the same time, DB Cargo provides traction on behalf of the first. The Halkali-DUSS train covers a distance of 2,000 kilometres crossing central Europe and the Balkans and countries like Austria, Slovenia, Croatia, Serbia and Bulgaria before reaching Turkey.

For Cobantur Boltas, this is the first time using rail exclusively in one of its services. However, it has a long-standing partnership with Kombiverkehr. “We have been combining the train connection across the Alps with the ferry in Trieste on the Turkey-Bavaria route and back for years – and will continue to do so. The new service will complement this offer,” said Iskender Cobanoglu, managing director at Boltas.

Indeed the companies have been cooperating in transporting cargo between Turkey and Italy by using ferry services in the Mediterranean sea as many other companies do. This cargo was loaded on trains and travelled to Bavaria through the Alps. Apart from providing an extra solution to the market, which can be adjusted according to customers’ shipping needs, Cobantur Boltas also contributes to greening its services since it will save up to 80 tonnes of CO2 per roundtrip resulting in an emission reduction of 70 per cent. All that just by launching one intermodal rail service.

Kombiverkehr, which is more or less responsible for setting up the new service, is confident about its development based on the history of cooperation that the partners have. On top of that, it also underlines that the intermodal train is a very well calculated move and nicely developed with teamwork. “To make this challenging project possible, we conducted intensive negotiations with tractionaries, terminals and authorities. We provide an efficient and complete package,” commented Alexander Ochs, managing director of Kombiverkehr.

The new service will bring added value to the market, say the partners, which is also indicated by the support from official authorities. It is important to mention that the first train’s departure from the DUSS terminal in Munich took place in the presence of the Bavarian Minister of Housing, Construction and Transport.