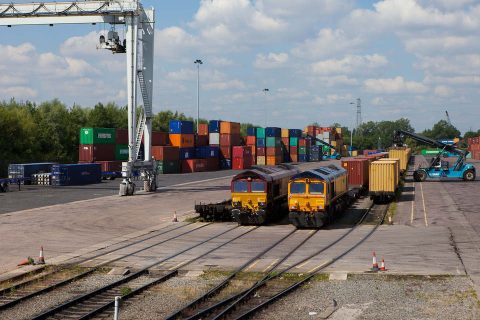 Associated British Ports, the owners at both Port of Liverpool and at Hams Hall, the intermodal terminal in Birmingham, have uncorked the champagne on the first weeks of operations on their new flow between the two destinations. The flow is in partnership with rail operator Freightliner, and the maritime multi-national CMA CGM Group.

Adding to the intermodal traffic at the Port of Liverpool, the new service, which is promoted by the operators of the port, Associated British Ports, aims to take sixty container trucks off the UK roads every day. The rail freight sector is being praised again for beating climate change and protecting the environment. Both Liverpool, the origin, and the destination of the new service, Birmingham, are among the most heavily congested urban areas of the UK.

Associated British Ports claim that Hams Hall is already the busiest inland rail freight terminal in the UK. That’s not an accolade ABP is willing to give up easily. The new service, in collaboration with Freightliner, will deliver another sixty containers per day to the terminal. The client for the deliveries is Containerships, the European short sea route specialist arm of the CMA CGM Group, the multi-national shipping and logistics corporation.

According to ABP, the new rail freight service removes approximately 4,800 lorry miles per day (7680km), which corresponds to a reduction of over 12,500 kg of carbon emissions every day. Liverpool port is expanding and seeing rapid growth in intermodal traffic. To cope with extra traffic, there are plans for a new road to be built into the docks. However, campaigners are lobbying for a rail-based solution instead.

That road project notwithstanding, ABP has sixteen of its twenty-one ports connected to the national rail network. Much of that connectivity delivers to Hams Hall, which handles over 120,000 TEUs every year. “It is encouraging to see the increasing interest in our terminal at Hams Hall”, said ABP’s Lee Armstrong, their Head of Commercial Development for rail. “With this new service, and the use of rail freight overall, [it is a] particularly useful solution to reducing carbon emissions by removing lorry miles.”

Located eight miles outside Birmingham, Hams Hall is situated adjacent to the Nuneaton-to-Birmingham railway line and handles deep-sea and short-sea traffic to and from ports, such as Southampton, Tilbury, and Felixstowe, as well as traffic from and to the Channel Tunnel and Scotland.

It may be noted that CMA CGM Group only this month made a three billion dollar (2.27 billion pounds, 2.67 billion euro) logistics acquisition in North America.