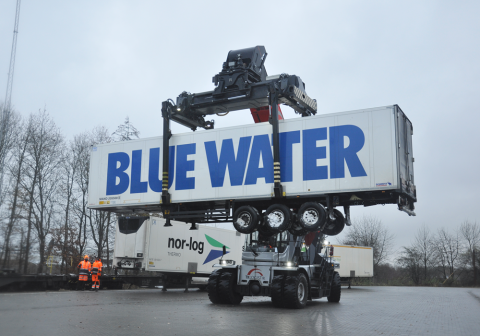 From northern Norway to the rest of Europe, fish products go by rail

Fish products from Narvik, Norway’s northernmost terminal, now find their way to the rest of Europe via train. A new intermodal service organised by Norwegian Blue Water Shipping, in collaboration with CargoNet and Nor-log Thermo, connecting Narvik with Padborg in Denmark and from there to other European destinations. The solution saves an estimated 40 per cent of transport time for fish products in this route.

The first train of the service arrived in Padborg’s cargo transport terminal on Sunday, 5 December. Cargo was unloaded and transported to Blue Water’s terminal, which is next to the Padborg terminal and specialises in reefer containers. From there, the containers were distributed in the European mainland.

The establishment of this new fresh fish produce route is not a one-time service. According to the partners involved, starting from January 2022, there will be a weekly train from Narvik to Padborg. Moreover, the train frequency will increase again after a few months, with Blue Water envisioning three weekly trains in autumn 2022.

“From January, we can offer weekly arrivals of fresh fish directly from Northern Norway. With the expected support from the Norwegian fish exporters, we are expecting three weekly arrivals by next fall. When we choose to transport by rail rather than road, we manage to reduce the time of delivery significantly, and that is naturally essential when transporting fresh fish,” commented Bent Rasmussen, director reefer logistics road at Blue Water.

After distributing the fish products in various destinations both in and outside Denmark, Blue Water utilises the emptied containers and reloads them with food products and other consumers goods. In the way, the train from Padborg does not return to Norway empty.

Instead, it carries products that travel via Malmo in Sweden and reach Oslo in Norway. From Oslo, they get distributed throughout Norway. The trains travelling in both directions are estimated to remove approximately 4,000 trucks from Norwegian roads and save around 7,000 tonnes of CO2 emissions per year.