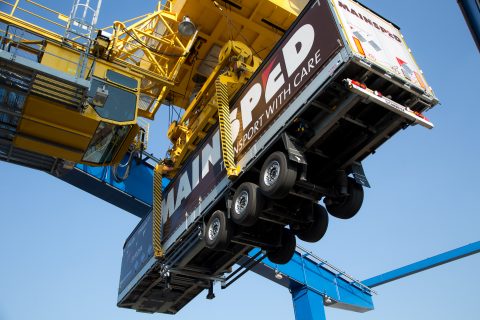 Three roundtrips per week already served the more than 1,200 kilometre-long route. However, Kombiverkehr identified a strong demand for semitrailer transport that led to the frequency increase of the intermodal service.

Alexander Ochs, managing director at Kombiverkehr, underlined that the intermodal “trailer trend continues unabated in the market”. On top of that, he expects that the numbers of semi-trailers transported by rail will continue rising in the specific corridor. As a result, the frequency increase between Ludwigshafen and Barcelona Morrot is an early measure to keep up with the growth rates.

“We are expanding our capacity for trailer transport by more than 30 per cent not only with new train departures but also through the greater use of T3000 mega trailer double pocket wagons for semitrailers with a clear interior height of three metres,” explained Ochs.

The fourth weekly train will depart from Ludwigshafen every Tuesday and return from Barcelona every Thursday. The Morrot terminal in Barcelona is a critical location positioned in the city’s port and providing full transhipment possibilities. However, the service’s benefits do not reduce to that.

Ludwigshafen’s hub function and interconnectivity is Kombiverkehr’s main focus in this case. “The integration of Ludwigshafen into the Duisburg Ruhrort Hafen gateway hub, the innovative rapid-transfer facility in Hannover Lehrte and Moerdijk in the Netherlands enable us to offer a large number of rapid onward connections, particularly those serving Scandinavia and the Baltic states. With Kombiverkehr and the ferry services of our shipping partners, Sweden, Finland, and Lithuania can now be reached from Spain by train and ferry,” concluded Ochs.