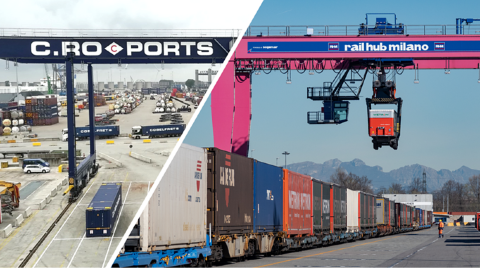 The daily service between Melzo and the port of Rotterdam was initiated in 2017. Since the beginning, the connection has been characterised by frequent train trips. In January this year, three roundtrips were added. “In just 9 months, the service has achieved great success and met with the approval of our customers”, Hannibal says.

With the fourth departure, the total number of roundtrips is now at eleven. This includes 7 roundtrips RSC-Melzo, and 4 roundtrips Botlek CRO – Melzo. “This Thursday, Hannibal is adding the fourth train, departing from the Botlek terminal”, explains Dave van Diggele from forwarding company Distri Rail.

Connection to UK, Ireland and Portugal

The new connection to Rotterdam Botlek also provides the opportunity to embark on one of the short-sea connections the terminal offers. These are daily direct lines to and from the United Kingdom, and multiple weekly sailings to and from Ireland and Portugal, with no need for truck transfers, Hannibal explains.

“There is an ever-growing demand for this service, which connects two important rail freight hubs in Europe”, said Sander de Roo, manager at Distri Rail earlier. Melzo is of strategic importance since it is in the centre of Northern Italy’s industrial heartland. From here, many connections link to Central and Southern Italy.

The rail freight shuttle between the Botlek terminal in the port of Rotterdam and the Italian Melzo (Milan) will be upgraded once again later this year, if all goes according to plan. Around December 2021, the total number of roundtrips should be 13 departures in both directions.

“But that’s not all”, promises Hannibal. “Also in 2022, many other rail connections will be launched.”