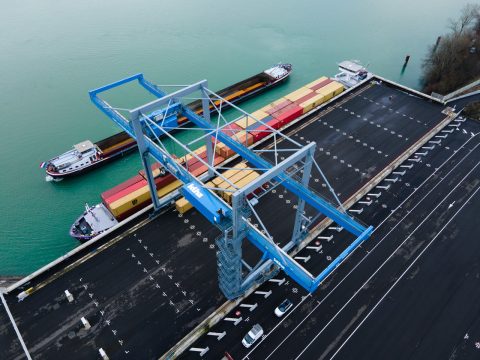 The region between Karslruhe (Germany) and Strasbourg (France) is about to have an additional terminal. In June of this year, a new trimodal terminal will be put into operation in Lauterbourg on the French Upper Rhine. This means an additional 80,000 TEU handling capacity in a logistically important region.

The terminal, which will be operated by Lauterbourg Rhine Terminal (LRT), lies directly on the Rhine and will therefore be a perfect transhipment facility. Rail traffic as well as barge connect the river with several western ports. Moreover, it lies in the heart of the economically strong hinterland of Germany and Alsace.

The recently modernised facility has a water-side gantry crane with a capacity of up to 29 containers per hour. Two half-train tracks of 400 metre each are available for the handling of the track. Two new reach stackers are responsible for loading and unloading the trucks.

The Lauterbourg Rhine Terminal (LRT) consists of four well-known French and German players. These are Paris Terminal, Compagnie Fluviale de Transport, Port Autonome de Strasbourg and Haeger & Schmidt Logistics. The terminal will be integrated into Haeger & Schmidt Logistics’ existing liner services by barge and rail between the ports on the Upper Rhine and the western ports.

The northern location is a good addition to ETK Euro Terminal Kehl and the Rhine Europe Terminals in Strasbourg,” says Heiko Brückner, Managing Director of Haeger & Schmidt Logistics. “Moreover, it is interesting for us to develop the heavy lift business there in addition to container handling, both core competencies of our company.”