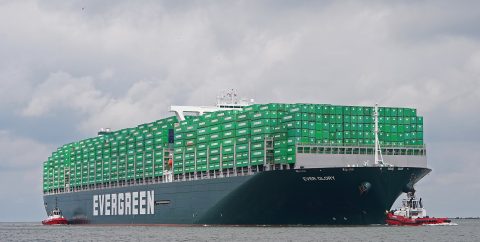 The price of the China-Europe Express train has surged again. This is after a short, calm period in March, as a result of the Chinese Spring Festival. However, the Suez Canal blockade ushered in another surge of the rail freight prices between China and Europe. What is the freight transportation market going through?

The price increase is reaching abnormal levels, according to the industry. Some single container quotations for destinations such as Malaszewicze and Duisburg reached tens of thousands of dollars. “These quotations do mostly not reflect the market value, the prices are intentionally increased. If you don’t pay such amounts, you simply can’t get on a train. In May, the freight rate is expected to rise by about 1,000 US Dollar on average, but capacity is tight and there is a queue”, an insider of the industry said.

The price increase this time seems to be expected. After the Suez Canal blockade caused a large-scale shipping interruption, major shipping companies suspended short-term export bookings. Among them, the giant Maersk said that its loss of capacity would reach 20-30 per cent in a few weeks, leading to a price increase.

Amidst the crisis, many cargo owners now turn to railway transportation. “Now the China-Europe Express is more influenced by the market than in previous years, prices will fluctuate due to the impact of shipping. It was unchanged in the previous quarter or even half a year, but now it basically changes once a month”, commented Joyce, account manager at T.H.I Railway Business Unit, a Chinese forwarding company.

The increase in freight transport prices is not unrelated to changes in container prices. “After a brief price cut, container leasing and sales prices have skyrocketed again and are in short supply. For example, in the Port of Rotterdam, a 40-foot container is priced higher than 3,500 US Dollars”, said Osmo Lahtinen, founder of OVL, a Finnish container leasing company.

The changes in the figures of the container market confirm his statement. According to the latest data from Container xChange, a container leasing and trading platform, the average price of used 20-foot container in China rose from 1,299 USD per container to 2,521 USD from November 2020 to March 2021, an increase of 94 per cent. What can be observed is that the shortage of containers in Asia has not been solved, but rather continues to worsen. The company’s CEO Johannes Schlingmeier commented: “We expect the market to tighten further in the next few weeks, as the knock-on effect of the Suez Canal crisis at the end of March disrupted normal container shipping services and equipment supply.”

In addition to the knock-on effect brought on by the Suez Canal crisis, China Railway’s new policy is also a booster for the price increase of the train. “Affected by the pandemic, China Railway’s train schedule in April was reduced by one-sixth from the previous month, resulting in little capacity”, Joyce explained.

However, there are different interpretations in the industry of China Railway’s decision to reduce its departures. Some people believe that the freight rate of China Railway Express has been lower than that of ordinary domestic trains in China, which has affected China Railway’s revenue, so it has been moderately reduced. Some people also believe that the freight rate of the China-Europe Express train is above the operation cost of China Railway and revenue is not a problem. The reduction plan would be due to insufficient railway capacity. But in any case, fewer departures are a fact.

In addition, due to the serious shortage of freight trains, the export of China Railway’s containers is prohibited, and the market can only use its own containers. This is followed by a price increase in the domestic used container market. Schlingmeier pointed out: “Now the price of a standard used container has far exceeded the ‘normal price.”

According to Container xChange, the price of second-hand containers in the current market has risen from about 1,000 to 2300-2600. US dollars. Although the price of used containers earlier dropped significantly due to the increase of eastbound traffic, the inventory has been cleared after the Spring Festival, and there are currently a few container sources left in China. The Shanghai-Hong Kong Stock Connect said that high costs and tight supply of containers are the norm of the future.

All these developments do not stand alone. What is lacking in the market is not only containers, but also wagons. The supply of wagons in broad-gauge countries is not sufficient. Take Russia as an example. According to CRRC, due to strict pandemic prevention measures on the Sino-Russian border and insufficient infrastructure at the port, a large number of wagons are stranded at the port. There are more than 5,000 units during peak periods.

Although the situation improved last week, there are still 3,500 wagons that have stagnated. Russia Container Lines stated: “There used to be a 10-day turnaround for wagons, but now it takes about 20 days.” In order to make up for the turnover rate, the company needs to spend 3 billion rubles to purchase at least 1,000 new wagons.

The stagnation of wagons at the port means that there are fewer wagons available in the market, which adds to an already shortage of supply due to the imbalance of east-west cargo. “The shortage of wagons is also one of the important reasons for the price increase”, Joyce explained.

Russia Container Lines said that the fundamental reason for the unsatisfactory turnover rate of wagons is that the infrastructure is insufficient to cope with the surge in cargo volume, and the improvement and upgrading projects cannot be completed overnight.