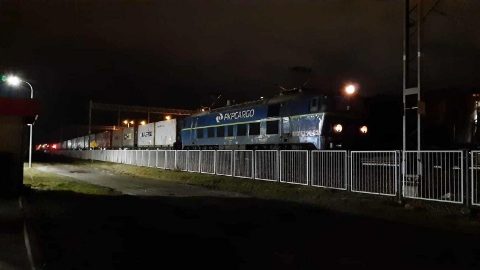 Originating from Euroterminal Slawkow and with DCT Gdansk Terminal as its final destination, an intermodal train wrote history as the heaviest ever in Polish freight transport. It left Slawkow carrying ninety 20-foot containers (90 TEUs overall), with a total weight of 3,335.75 tones.

PKP Cargo SA and PKP Cargo Connect organised the service together with Maersk. Following the trip between the two Polish terminals, the train’s cargo was then transhipped to one of Maersk’s container ships at the Port of Gdansk.

Understandably, commissioning such heavy intermodal trains is not something usual. Most of this kind of trains weight less than 2,000 tonnes under normal conditions. Thus, PKP Cargo had to obtain special passage approvals from the Polish Railways, necessary for specific parts of the route.

Moreover, PKP Cargo had to use special resources in terms of equipment and loading processes due to the service’s distinctive characteristics. Nevertheless, with all these different parties’ involvement and good cooperation, Poland’s heaviest intermodal train trip became a reality, which also contributed to reducing CO2 footprint approximately by 5 to 9 per cent, compared to the conventional transport type of the cargo.

According to Ivan Ružbacký, President of PKP Cargo Connect, “cooperation with such a large partner, like Maersk, is precious for the development of our company, but also the increase of container transport in the North-South corridor and the improvement of services”. Years of cooperation between the companies have resulted in diverse projects, with the latest one becoming a flagship for the Polish intermodal sector.

Czesław Warsewicz, President of PKP Cargo SA, shows the same appreciation for collaborations as the one with Maersk. “The North-South corridor relies heavily on the handling of products shipped to and from Polish ports. That is why we highly value cooperation with Maersk, which is one of the largest logistics operators in the world”, he concluded.