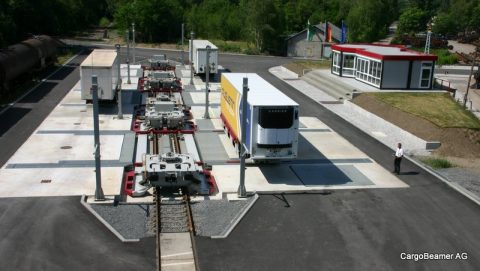 The European Investment Bank Group has granted a loan of 12.6 million euros to Cargobeamer for the construction of three innovative rail freight terminals. The terminals in Calais (France), Kaldenkirchen (Germany) and Domodossola (Italy) will operate on an innovative system for the automated transfer of trailers to and from rail carriages, which is set to unlock a shift to rail. The project will be carried out in the period 2020–2022.

The European Investment Bank Group (EIB) and CargoBeamer signed an agreement on 22 December for the equity-like financing, securing a loan combined with a profit sharing option.The EIB loan is part of the Future Mobility Facility. This goes back to a joint initiative of the EIB and the European Commission under the debt financing instrument of the Connecting Europe Facility (CEF).

CargoBeamer has developed a technology to automatically load and unload up to 900 semi-trailers of all types per day onto rail cars. In this way, a large part of the truck traffic can be shifted to rail. The first terminal to fully rely on CargoBeamer technology is currently being built in Calais (France) and will open in mid-2021.

CargoBeamer’s technology, which received EU certification in 2013, consists of railroad cars, transshipment terminals and logistics software. The system is compatible with 80 per cent of the semi-trailers currently in use. The terminals will be connected to each other, and to other destinations.

In line with European Green Deal

“In Europe, most inland freight transport is still carried out by road. This causes traffic bottlenecks, air pollution and greenhouse gas emissions. As the volume of goods is expected to continue to grow, it is more important than ever to shift transport to rail”, commented EIB Vice-President Ambroise Fayolle.

Adina Vălean, EU Commissioner for Transport: “This loan is in line with our European Green Deal and our strategy for sustainable and intelligent mobility, which is also intended to achieve more environmentally friendly freight transport. In the transition to intelligent and sustainable transport, intermodality is a crucial component. I am pleased that we can support CargoBeamer in shifting freight traffic to rail.”

CargoBeamer has been operating the route between Kaldenkirchen (Germany) and Domodossola (Italy) since 2015. On this route, the company handles around seven per cent of the road freight traffic in the corridor (excluding the further hinterland) – proof that a significant shift in traffic from road to rail is possible.

Markus Fischer, CFO of CargoBeamer said: “An international network of terminals at carefully selected locations is a decisive key to success in our business. We therefore welcome this financing package as an important step in our ambitious growth plan.