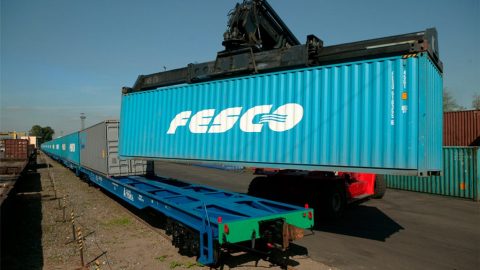 Russian companies FESCO Group and RZD Logistics have added a new branch to the Japan/South Korea – Europe multimodal route. The Chinese seaport of Qingdao has been linked to Vladivostok with the help of FESCO’s shipping service. At the Russian seaport, the freight is transhipped from vessel to wagons for transport to European countries.

On 28 February a container train departed from Vladivostok seaport. It was composed of containers delivered by sea from China (Qingdao) and South Korea (Busan). This train arrived in Brest, the Belarusian gateway on the EU border, on 10 March. As a result, the travel time between Vladivostok and Brest was 12 days.

By adding a Chinese branch, the Japan/South Korea – Europe multimodal route, also known as the Trans-Siberian LandBridge service, has become a real transport artery for the Asia-Pacific region. These containers will be split into several groups for delivery to customers in Poland, Germany and Belgium. Polish logistics company PCC Intermodal, a partner of FESCO Group and RZD Logistics, is responsible for the European part of the route.

Remarkable about the new service is also the type of freight delivered: acids which are used in pharmaceuticals and other industries. For the first time, a type of dangerous goods was shipped on this multimodal route. “We see great interest on the part of customers in our Trans-Siberian LandBridge service, so we decided to expand the range of goods by adding the very demanded transportation of dangerous goods.

“Taking into account our competencies, accumulated experience and the availability of our own assets throughout the entire intermodal chain, we can guarantee our customers compliance with delivery deadlines and, most importantly, the safety of transportation to anywhere in Europe,” said Maxim Sakharov, CEO of FESCO Group. As for the South Korean branch, spare car parts and various equipment produced by South Korean companies are shipped.

The Trans-Siberian LandBridge service was launched by FESCO Group, RZD Logistics and PCC Intermodal in 2019. Initially, the partners arranged deliveries from the Japanese port of Yokohama to the Polish city of Wrocław via Vladivostok. The first shipment was carried out in May 2019. Afterwards, they added the South Korean branch. In September 2019, the shipments on the multimodal route became regular. The delivery time from Asia to Europe takes 19-21 days depending on the final destination.