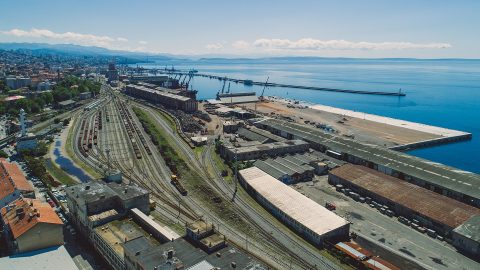 After COSCO’s success in the Greek seaport of Piraeus, other Chinese companies are in the game for constructing and operating a new container terminal in the Port of Rijeka, the largest harbour in Croatia. The Chinese consortium offered a better bid than the competing consortium of APM Terminals, part of Maersk and its Croatian partner Enna Logic. The final decision will be taken by the end of March, while the agreement will be signed by the end of June.

The Rijeka Port Authority has launched the second round of the procurement process for the development, concession and management of the Zagreb Deep Sea Container Terminal in the port area. Two consortiums have proposed their bids. The first offer was presented by the consortium of three Chinese companies: Ningbo Zhoushan Port Company Limited (holds a stake of 70 per cent in the consortium), Tianjin Port Overseas Holding Limited (20 per cent) and China Road and Bridge Corporation (10 per cent).

According to Jutarnji list, the Chinese proposed to complete the second stage of the construction works at the terminal in five years and to pay the concession fee of 2 million euros a year. At the same time, the second bidder, the consortium of APM Terminals (51 per cent) and Enna Logic (49 per cent), offered a ten-year period for the construction and 1 million euros of the annual concession payment.

As of today, the Port of Rijeka with a freight turnover of 11.5 million tonnes (2019) has only one container facility. It is the Adriatic Gate Container Terminal that has an annual capacity of 600,000 TEUs. Last year this terminal handled container traffic of over 305,000 TEUs. However, the Rijeka Port Authority expects that it will grow in the following years and will exceed a volume of 600,000 TEUs. Therefore, the Croatian main seaport needs another container facility.

In 2019, the Rijeka Port Authority with the help of the financial support of the Croatian government, the European Commission and World Bank completed the first stage of the construction works in order to establish the initial site for the planned facility. The second stage will include the development of the terminal infrastructure (railways, cranes, warehouses, etc.).

It is expected that the Zagreb Deep Sea Container Terminal will cover an area of around 20 hectares, will have a length of up to 680 metres and a depth of up to 20 metres (Adriatic Gate Container Terminal has a maximum depth of around 15 metres). The new facility will be able to receive the latest generation of container vessels with a capacity of over 14,000 TEUs.