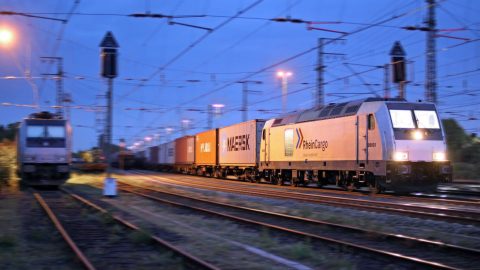 The partners CTS and IGS are linking their intermodal networks via the container terminal Cologne Niehl Hafen. As a result, they now link the economic region of Schweinfurt to the ports of Rotterdam, Antwerp and Moerdijk, by train and barge.

The team up is yet an expansion of their earlier cooperation. They have already established a joint intermodal offer Cologne – Port of Hamburg and Cologne – Bremerhaven, both a two-way service, three times per week. After a positive response, the partners CTS Container Terminal GmbH, Cologne and IGS Intermodal Container Logistics GmbH, Hamburg are launching another joint product.

The companies are linking their existing rail and inland waterway vessels via the container terminal Cologne Niehl Hafen as a focal point. In this way, customers in the foreign trade affluent economic region of Lower Franconia are now offered the option of loading export containers by block train directly from the KV terminal in Schweinfurt with environmentally friendly modes of transport to the western ports.

The containers at the Cologne Niehl Hafen terminal directly transfer to the connecting trains and inland vessels of the CTS to Rotterdam, Antwerp and Moerdijk.

The new connection starts with two train departures per week in export from Schweinfurt. If necessary, the offer can be extended in the future. The departure days in Schweinfurt are on Wednesdays and Fridays. In Rotterdam, the Deep Sea terminals ECT Delta, APMT 1 and 2, RWG and Euromax are directly connected. In Antwerp, the new service serves the sea terminals at Kaien 118, 869, 913 and 1700-1742.

In addition, the port of Moerdijk is regularly approached, which has become increasingly important for short sea traffic to and from the United Kingdom in recent years, among other things. The trains between Schweinfurt CLS and CTS Cologne Niehl Hafen continue to be available to customers for the repositioning of empty containers between the respective depots and for full container transports from the Lower Franconia region to the Rhineland.

The intermodal service in the western ports is an important addition to the block train operated by IGS between the port of Hamburg and Schweinfurt, as well as between Bremerhaven and Schweinfurt. It is already operating five times a week and in the meantime.

As a rule, containers from the Lower Franconia region, which are destined for the western ports, have hitherto been transported by lorry to other, more remote CT terminals, which have an appropriate connection to the Westhafen or are transported by direct truck to the ports. The new product significantly shortens the necessary truck forwarders to the western ports. It relieves the burden on the roads and helps to reduce CO2 emissions. In addition, it increases the attractiveness of the Lower Franconia region for industry, trade and logistics.

The offer preparation, scheduling and processing of this new connection will be handled by the IGS branch in Rotterdam.