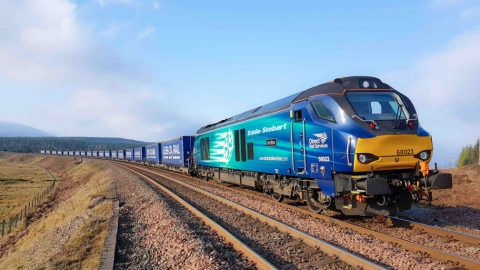 Trials of a direct weekend intermodal service connecting Grangemouth in Central Scotland and Tilbury near London, have been made permanent. While proving attractive for trade in and out of the UK, the service is also aimed at domestic carriers, moving goods around the UK, at a time when the availability of other modes, particularly road transport, is critically short. The diagram helps address an underlying logistics issue for UK operators.

The new service links ports on the River Forth and the Thames with a weekly service, carrying up to 36 containers in both directions. Weekend road movements in the UK have been hampered, according to trade bodies, by a long-standing shortage of drivers. It is into that background that Forth Ports, the operators of both Grangemouth and Tilbury, and their rail logistics partners, DRS and Stobart, launched this service. They must not be alone in considering further developments.

Grangemouth, Scotland’s largest port, has always utilised its extensive railhead connection to advantage. With an emphasis on bulks and liquids, it has been a hub for tanker operations for decades. High capacity pipes connect the port directly to an adjacent oil refinery, that serves all of Scotland and the North of England.

Although the port is 40km from both Glasgow and Edinburgh, the rail layout favours the West Coast towards Glasgow. With a detour it is possible to reach the East Coast Main Line, giving two alternatives for the service. That access to Edinburgh and the East is on a line that, ironically, also serves nearby Eurocentral, a purpose built and government-backed facility for road-rail interoperability. However, given the rapidly changing attitude towards the environmental impact of road transport, there must be optimism that both the Port of Grangemouth and Eurocentral will see considerably increased intermodal long-haul traffic in the future.

Frequent calls for passenger utilisation of the short Grangemouth spur have been made on the back of the extensive freight operations. For now though, cargo and operations have the rails to themselves. It is a different picture at Tilbury, where the vast docks fit operations around an intensive metro service. Although Tilbury is a smaller administrative community than Grangemouth, its proximity to London ensures that commuters play a significant role in the health of its rail service.

Nevertheless, the importance of dock operations to the local economy meant that the inauguration of a direct freight connection with Scotland gathered attention in the local media. Contributing to the port’s annual throughput of 16 million tonnes, the service is the latest part of the port’s ambition to implement its long-standing commitment to a sustainable and multimodal approach.

Speaking to Railfreight.com just over two years ago, Peter Ward, the port’s Commercial Director, said that Tilbury was making the most of its assets and seeking to ensure that customers think rail, river and road for their most effective delivery solution. Effectively connecting the River Thames with the River Forth takes that ambition one step further, and perhaps goes some way to remedying the nation’s logistics issues. Food for thought for other operators too, especially those with vacancy notices posted on their truck parks.